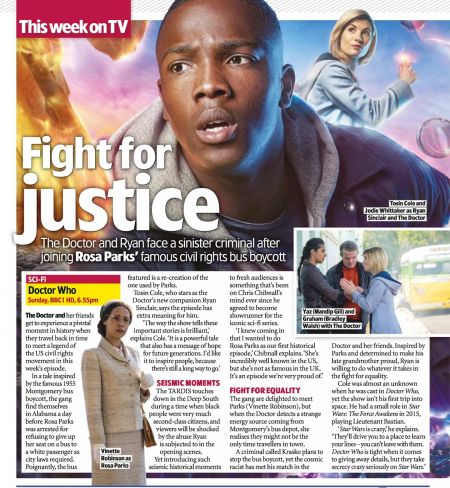 Tosin Cole and Jodie Whittaker as Ryan Sinclair and The Doctor

The Doctor and her friends get to experience a pivotal moment in history when they travel back in time to meet a legend of the US civil rights movement in this week's episode.

In a tale inspired by the famous 1955 Montgomery bus boycott, the gang find themselves in Alabama a day before Rosa Parks was arrested for refusing to give up her seat on a bus to a white passenger as city laws required. Poignantly, the bus featured is a re-creation of the one used by Parks.

Tosin Cole, who stars as the Doctor's new companion Ryan Sinclair, says the episode has extra meaning for him.

'The way the show tells these important stories is brilliant,' explains Cole. 'It is a powerful tale that also has a message of hope for future generations. I'd like it to inspire people, because there's still a long way to go.'

The TARDIS touches down in the Deep South during a time when black people were very much second-class citizens, and viewers will be shocked by the abuse Ryan is subjected to in the opening scenes.

Yet introducing such seismic historical moments to fresh audiences is something that's been on Chris Chibnall's mind ever since he agreed to become showrunner for the iconic sci-fi series.

'I knew coming in that I wanted to do Rosa Parks as our first historical episode,' Chibnall explains. 'She's incredibly well known in the US, but she's not as famous in the UK. It's an episode we're very proud of.'

The gang are delighted to meet Parks (Vinette Robinson), but when the Doctor detects a strange energy source coming from Montgomery's bus depot, she realises they might not be the only time travellers in town.

A criminal called Krasko plans to stop the bus boycott, yet the cosmic racist has met his match in the Doctor and her friends. Inspired by Parks and determined to make his late grandmother proud, Ryan is willing to do whatever it takes in the fight for equality.

Cole was almost an unknown when he was cast in Doctor Who, yet the show isn't his first trip into space. He had a small role in Star Wars: The Force Awakens in 2015, playing Lieutenant Bastian.

'Star Wars is crazy,' he explains. 'They'll drive you to a place to learn your lines – you can't leave with them. Doctor Who is tight when it comes to giving away details, but they take secrecy crazy seriously on Star Wars.'

Yaz (Mandip Gill) and Graham (Bradley Walsh) with The Doctor