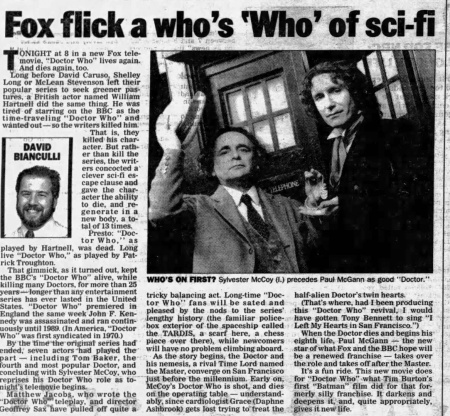 TONIGHT at 8 in a new Fox telemovie, "Doctor Who" lives again. And dies again, too.

Long before David Caruso, Shelley Long or McLean Stevenson left their popular series to seek greener pastures, a British actor named William Hartnell did the same thing. He was tired of starring on the BBC as the time-traveling "Doctor Who" and wanted out so the writers killed him.

That is, they killed his character. But rather than kill the series, the writers concocted a clever sci-fi escape clause and gave the character the ability to die, and regenerate in a new body, a total of 13 times.

That gimmick, as it turned out, kept the BBC's "Doctor Who" alive, while killing many Doctors, for more than 25 years longer than any entertainment series has ever lasted in the United States. "Doctor Who" premiered in England the same week John F. Kennedy was assassinated and ran continuously until 1989. (In America, "Doctor Who" was first syndicated in 1970.)

By the time the original series had ended, seven actors had played the part including Tom Baker, the fourth and most popular Doctor, and concluding with Sylvester McCoy, who reprises his Doctor Who role as tonight's telemovie begins.

Matthew Jacobs, who wrote the "Doctor Who" teleplay, and director Geoffrey Sax have pulled off quite a tricky balancing act. Long-time "Doctor Who" fans will be sated and pleased by the nods to the series' lengthy history (the familiar police-box exterior of the spaceship called the TARDIS, a scarf here, a chess piece over there), while newcomers will have no problem climbing aboard.

As the story begins, the Doctor and his nemesis, a rival Time Lord named the Master, converge on San Francisco just before the millennium. Early on, McCoy's Doctor Who is shot, and dies on the operating table understandably, since cardiologist Grace (Daphne Ashbrook) gets lost trying to treat the half-alien Doctor's twin hearts.

(That's where, had I been producing this "Doctor Who" revival, I would have gotten Tony Bennett to sing "I Left My Hearts in San Francisco.")

When the Doctor dies and begins his eighth life, Paul McGann the new star of what Fox and the BBC hope will be a renewed franchise takes over the role and takes off after the Master.

It's a fun ride. This new movie does for "Doctor Who" what Tim Burton's first "Batman" film did for that formerly silly franchise. It darkens and deepens it, and, quite appropriately, gives it new life.