Fun on the Pitch with Pete Murray 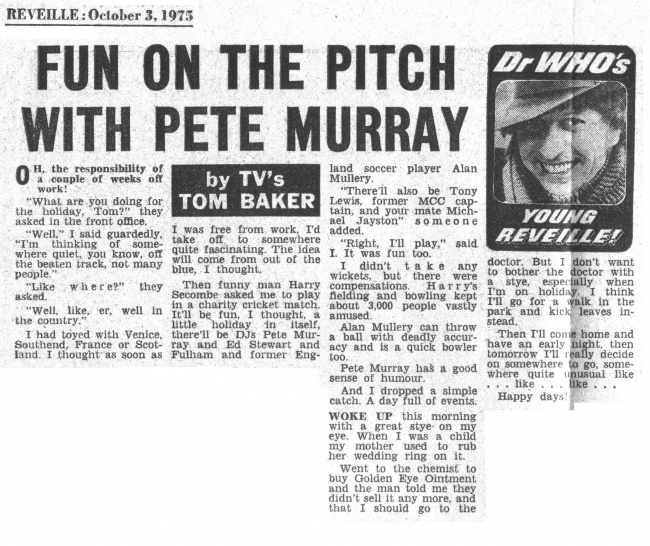 Oh, the responsibility of a couple of weeks off work!

"What are you doing for the holiday, Tom?" they asked in the front office.

"Well," I said guardedly, "I'm thinking of somewhere quiet, you know, off the beaten track, not many people."

I had toyed with Venice, Southend, France or Scotland. I thought as soon as I was free from work, I'd take off to somewhere quite fascinating. The idea will come from out of the blue, I thought.

Then funny man Harry Secombe asked me to play in a charity cricket match. It'll be fun, I thought, a little holiday in itself, there'll be DJs Pete Murray and Ed Stewart and Fulham and former England soccer player Alan Mullery.

I didn't take any wickets, but there were compensations. Harry's fielding and bowling kept about 3,000 people vastly amused.

Alan Mullery can throw a ball with deadly accuracy and is a quick bowler too.

Pete Murray had a good sense of humour.

And I dropped a simple catch. A day full of events.

WOKE UP this morning with a great stye on my eye. When I was a child my mother used to rub her wedding ring on it.

Went to the chemist to buy Golden Eye Ointment and the man told me they didn't sell it any more, and that I should go to the doctor. But I don't want to bother the doctor with a stye, especially when I'm on holiday. I think I'll go for a walk in the park and kick leaves instead.