From The Doctor Who Cuttings Archive
Revision as of 00:35, 3 May 2022 by John Lavalie (talk | contribs)
(diff) ← Older revision | Latest revision (diff) | Newer revision → (diff)
Jump to navigationJump to search 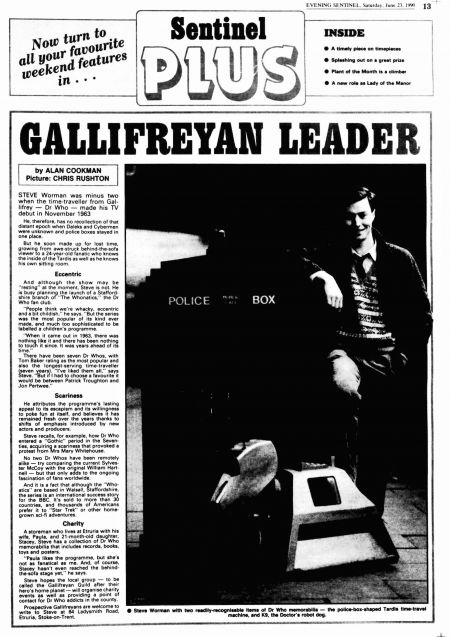 STEVE Worman was minus two when the time-traveller from Gallifrey — Dr Who — made his TV debut in November 1963.

He, therefore, has no recollection of that distant epoch when Daleks and Cybermen were unknown and police boxes stayed in one place.

But he soon made up for lost time, growing from awe-struck behind-the-sofa viewer to a 24-year-old fanatic who knows the inside of the Tardis as well as he knows his own sitting room.

And although the show may be "resting" at the moment, Steve is not. He is busy planning the launch of a Staffordshire branch of "The Whonatics," the Dr Who fan club.

"People think we're whacky, eccentric and a bit childish," he says. "But the series was the most popular of its kind ever made, and much too sophisticated to be labelled a children's programme.

"When it came out in 1963, there was nothing like it and there has been nothing to touch it since. It was years ahead of its time."

There have been seven Dr Whos, with Tom Baker rating as the most popular and also the longest-serving time-traveller (seven years). "I've liked them all," says Steve. ' But if I had to choose a favourite it would be between Patrick Troughton and Jon Pertwee."

He attributes the programme's lasting appeal to its escapism and its willingness to poke fun at itself, and believes it has remained fresh over the years thanks to shifts of emphasis introduced by new actors and producers.

Steve recalls, for example, how Dr Who entered a "Gothic" period in the Seventies, acquiring a scariness that provoked a protest from Mrs Mary Whitehouse.

No two Dr Whos have been remotely alike — try comparing the current Sylvester McCoy with the original William Hartnell — but that only adds to the ongoing fascination of fans worldwide.

And it is a fact that although the "Who-atics" are based in Walsall, Staffordshire, the series is an international success story for the BBC. It's sold to more than 30 countries, and thousands of Americans prefer it to "Star Trek" or other homegrown sci-fi adventures.

A storeman who lives at Etruria with his wife, Paula, and 21-month-old daughter, Stacey, Steve has a collection of Dr Who memorabilia that includes records, books, toys arid posters.

"Paula likes the programme, but she's not as fanatical as me. And, of course, Stacey hasn't even reached the behind-the-sofa stage yet," he says.

Steve hopes the local group — to be called the Gallifreyan Guild after their hero's home planet — will organise charity events as well as providing a point of contact for Dr Who addicts in the county.

Prospective Gallifreyans are welcome to write to Steve at 84 Ladysmith Road, Etruria, Stoke-on-Trent.