Guess WHO's Coming to Grand Rapids! 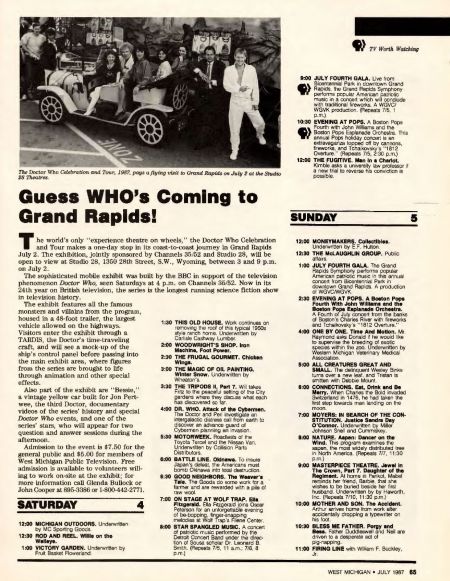 The world's only "experience theatre on wheels," the Doctor Who Celebration and Tour makes a one-day stop in its coast-to-coast journey in Grand Rapids July 2. The exhibition, jointly sponsored by Channels 35/52 and Studio 28, will be open to view at Studio 28, 1350 28th Street, S.W., Wyoming, between 3 and 9 p.m. on July 2.

The sophisticated mobile exhibit was built by the BBC in support of the television phenomenon Doctor Who, seen Saturdays at 4 p.m. on Channels 35/52. Now in its 24th year on British television, the series is the longest running science fiction show in television history.

The exhibit features all the famous monsters and villains from the program, housed in a 48-foot trailer, the largest vehicle allowed on the highways. Visitors enter the exhibit through a TARDIS, the Doctor's time-traveling craft, and will see a mock-up of the ship's control panel before passing into the main exhibit area, where figures from the series are brought to life through animation and other special effects.

Also part of the exhibit are "Bessie," a vintage yellow car built for Jon Pertwee, the third Doctor, documentary videos of the series' history and special Doctor Who events, and one of the series' stars, who will appear for two question and answer sessions during the afternoon.

Admission to the event is $7.50 for the general public and $5.00 for members of West Michigan Public Television. Free admission is available to volunteers willing to work on-site at the exhibit; for more information call Glenda Bullock or John Cooper

Caption: Caption: The Doctor Who Celebration and Tour, 1987, pays a flying visit to Grand Rapids on July 2 at the Studio 28 Theatres.