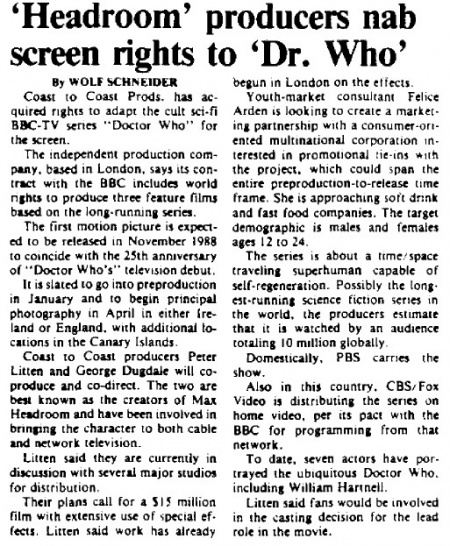 Coast to Coast Prods. has acquired rights to adapt the cult sci-fi BBC-TV series "Doctor Who" for the screen.

The independent production company, based in London, says its contract with the BBC includes world rights to produce three feature films based on the long-running series.

The first motion picture is expected to be released in November 1988 to coincide with the 25th anniversary of "Doctor Who's" television debut.

It is slated to go into preproduction in January and to begin principal photography in April in either Ireland or England. with additional locations in the Canary Islands.

Coast to Coast producers Peter Linen and George Dugdale will coproduce and co-direct. The two are best known as the creators of Max Headroom and have been involved in bruising the character to both cable and network television.

Litten said they are currently in discussion with several major studios for distribution.

Their plans call for a $15 million film with extensive use of special effects. Litten said work has already begun in London on the effects.

Youth-market consultant Felice Arden is looking to create a marketing partnership with a consumer-oriented multinational corporation interested in promotional lie-ins with the project, which could span the entire preproduction-to-release time frame. She is approaching soft drink and fast food companies. The target demographic is males and females ages 12 to 24.

The series is about a time/space traveling superhuman capable of self-regeneration. Possibly the longest-running science fiction series in the world, the producers estimate that it is watched by an audience totaling 10 million globally.

Also in this country, CBS/Fox Video is distributing the series on home video, per its pact with the BBC for programming from that network.

To date, seven actors have portrayed the ubiquitous Doctor Who, including William Hartnell.

Linen said fans would be involved in the casting decision for the lead role in the movie.