Here's the who, what, when, where, how and why on popular television show 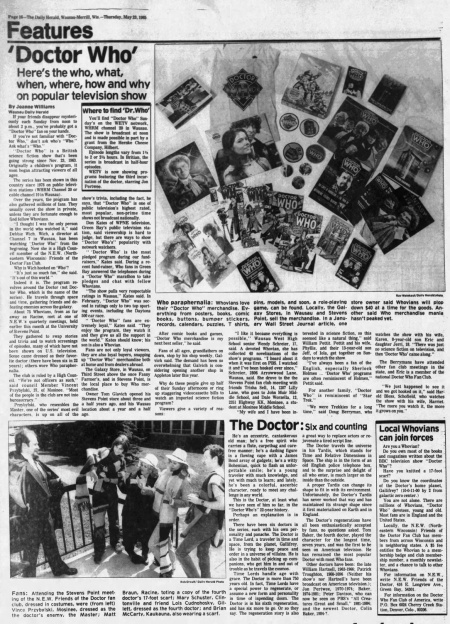 If your friends disappear mysteriously each Sunday from noon to about 2 p m.. you've probably got a "Doctor Who" fan on your hands.

"Doctor Who" is a British science fiction show that's been going strong since Nov. 23, 1963. Originally a children's program, it soon began attracting viewers of all ages.

The series has been shown in this country since 1978 on public television stations (WHRM Channel 20 or cable channel 10 in Wausau).

Over the years, the program has also gathered millions of fans. They usually covet the show in private. unless they are fortunate enough to find fellow Whovians.

"I thought I was the only person in the world who watched it," said Debbie Wich. Wich, a director at channel 7 in Wausau, has been watching "Doctor Who" from the beginning. Now she is a High Council member of the N.E.W. (Northeastern Wisconsin) Friends of the Doctor Fan Club.

Why is Wich hooked on 'Who'?

Indeed it is. The program revolves around the Doctor (not Doctor Who, which is the name of the series). He travels through space and time, gathering friends and defeating enemies across the galaxy.

About 75 Whovians, from as far away as Racine, met at one of N.E.W.'s quarterly meetings, held earlier this month at the University of Stevens Point.

They gathered to swap stories and trivia and to watch screenings of episodes, many of which have not been shown on U.S. television. Some came dressed as their favorite doctor (there have been six in 22 years); others wore Who paraphernalia.

The club is ruled by a High Council. "We're not officers as such," said council Member Vincent Przybylski, 37, of Mosinee. "Most of the people in the club are not into bureaucracy."

Przybyiski, who resembles the Master, one of the series' most evil characters, is up on all of the show's trivia, including the fact, he says, that "Doctor Who" is one of public television's highest rated, most popular, non-prime time shows not broadcast nationally.

Don Kates of WPNE television, Green Bay's public television station, said viewership is hard to judge, but there are ways to show "Doctor Who's" popularity with network watchers.

"'Doctor Who' is the most pledged program during our fundraisers," Kates said. During a recent fund-raiser, Who fans in Green Bay answered the telephones during a "Doctor Who" marathon to take pledges and chat with fellow Whovians.

"The show pulls very respectable ratings in Wausau," Kates said. In February, "Doctor Who" was second in ratings only to two top sporting events, including the Daytona 500 car race.

"'Doctor Who" fans are extremely loyal," Kates said. "They enjoy the program, they watch it and they give us all the support in the world." Kates should know; his son is also a Whovian.

Fans are not only loyal viewers, they are also loyal buyers, snapping up "Doctor Who" merchandise both at home and from dealers abroad.

The Galaxy Store, in Wausau, on Third Street above the once Fanny Farmer's, and in Stevens Point, is the local place to buy Who merchandise.

Owner Tom Glavich opened his Stevens Point store about three and a half years ago, and his Wausau location about a year and a half ago.

After comic books and games, "Doctor Who merchandise is my next best seller," he said.

Fans of all ages, grandfathers on down, stop by his shop weekly, Galvich said. The demand has been so overwhelming that Galvich is considering opening another shop in Appleton later this year.

Why do these people give up half of their Sunday afternoons or ring up staggering videocassette bills to watch an imported science fiction program?

Viewers give a variety of reasons:

"I like it because everything is possible," Wausau West High School senior Wendy Schreier, 17, said. A devoted Whovian, she has collected 40 novelizations of the show's programs. "I heard about it when it was first on PBS. I watched it and I've been hooked ever since," Schreier, 2806 Arrowwood Lane, Wausau, said, She drove to the the Stevens Point fan club meeting with friends Trisha Sell, 14, 1207 Lilly Lane, who goes to John Muir Middle School, and Dale Worzella, 12, 2351 Highway KK, Mosinee, a student at Mosinee Middle School.

"My wife and I have been interested in science fiction, so this seemed like a natural thing," said William Pettit. Pettit and his wife, Phyllis. and their 13-year-old son Jeff, of Iola, get together on Sundays to watch the show.

"I've always been a fan of the English, especially Sherlock Holmes ... 'Doctor Who' programs are often reminiscent of Holmes," Pettit said.

For another family, "Doctor Who" is reminiscent of "Star Trek."

"We were Trekkies for a long time," said Doug Berryman, who watches the show with his wife, Karen, 8-year-old son Eric and daughter Jerri, 18. "There was just no science fiction on television, and then 'Doctor Who' came along."

The Berrymans have attended other fan club meetings in the state, and Eric is a member of the national Doctor Who Fan Club.

"We just happened to see it and we got hooked on it," said Harold Bless, Schofield, who watches the show with his wife, Harriet. "The more you watch it, the more it grows on you."

The Doctor: Six and counting

He's an eccentric, cantankerous old man; he's a free spirit who carries a flute, carpetbag and carefree manner; he's a dashing figure in a flowing cape with a James Bond array of gadgets; he's a witty Bohemian, quick to flash an unforgettable smile; he's a young traveler with much knowledge, and yet with much to learn; and lately, he's been a colorful, ascerbic character, ready to meet any challenge in any world.

This is the Doctor, at least what we have seen of him so far, in the "Doctor Who's" 22-year history.

Perhaps an explanation is in order.

There have been six doctors in the series, each with his own personality and panache. The Doctor is a Time Lord, a traveler in time and space, from the planet, Gallifrey. He is trying to keep peace and order in a universe of villains. He is also in the habit of picking up companions, who get him in and out of trouble as he travels the cosmos.

Time Lords handle age with grace. The Doctor is more than 750 years old. In fact, Time Lords have a special power to regenerate, or assume a new form and personality in time of inpending doom. The Doctor is in his sixth regeneration, and has six more to go. Or so they say. The regeneration story is also a great way to replace actors or rejuvenate a tired script line.

The Doctor travels the universe in his Tardis, which stands for Time and Relative Dimensions in Space. The ship is in the form of an old English police telephone box, and to the surprise and delight of all who enter, is much larger on the inside than the outside.

A proper Tardis can change its shape to fit in with its environment. Unfortunately, the Doctor's Tardis has never worked that way and has maintained its strange shape since it first materialized on Earth and in England.

The Doctor's regenerations have all been enthusiastically accepted by fans, no questions asked. Tom Baker, the fourth doctor, played the character for the longest time, seven years, and was the first to be seen on American television. He has remained the most popular Doctor with most Who fans.

Caption: Who paraphernalia: Whovians love their "Doctor Who" merchandise. Everything from posters, books, comic books, buttons, bumper stickers, records, calendars, puzzles, T shirts, pins, models, and soon, a role-playing game, can be found. Locally, the Galaxy Stores, in Wausau and Stevens Point, sell the merchandise. In a January Wall Street Journal article, one store owner said Whovians will plop down $40 at a time for the goods. Another said Who merchandise mania hasn't peaked yet.

Caption: Fans: Attending the Stevens Point meeting of the N.E.W. Friends of the Doctor fan club, dressed in costumes, were (from left) Vince Przybylski, Mosinee, dressed as the the doctor's enemy, the Master; Matt Braun, Racine, toting a copy of the fourth doctor's 17-foot scarf; Mary Schuster, Clintonville and friend Lois Cudnohosky, Gillett, dressed as the fourth doctor; and Brian McCarty, Kaukauna, also wearing a scarf.

You'll find "Doctor Who" Sunday's on the WETV network, WHRM channel 20 in Wausau. The show is broadcast at noon and is made possible in part by a grant from the Hernke Cheese Company, Hilbert.

Episode lengths vary from 1 1/2 to 2 or 2 1/2 hours. In Britian, the series is broadcast in half-hour episodes.

Are you a Whovian?

Do you own most of the books and magazines written about the BBC television show "Doctor Who"?

Have you knitted a 17-foot scarf?

You are not alone. There are millions of Whovians, "Doctor Who" devotees, young and old. Most fans are in England and the United States.

Locally, the N.E.W. (Northeastern Wisconsin) Friends of the Doctor Fan Club has members from across Wisconsin and in neighboring states. A $5 fee entitles the Whovian to a membership badge and club membership number, a monthly newsletter, and a chance to talk to other Whovians.