His life is just a stunt 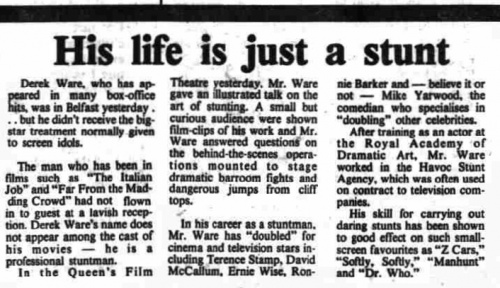 Derek Ware, who has appeared in many box-office hits, was in Belfast yesterday ... but he didn't receive the big-star treatment normally given to screen idols.

The man who has been in films such as "The Italian Job" and "Far from the Maddining Crowd" had not flown in to guest at a lavish reception. Derek Ware's name does not appear among the cast of his movies-he is a professional stuntman.

In the Queen's Film Theatre yesterday, Mr. Ware gave an illustrated talk on the art of stunting. A small but curious audience were shown film-clips of his work and Mr. Ware answered questions on the behind-the-scenes operations mounted to stage dramatic barroom fights and dangerous jumps from cliff tops.

In his career as a stuntman, Mr. Ware has "doubled" for cinema and television stars including Terence Stamp, David McCallum, Ernie Wise, Ron- Me Barker and believe it or not Mike Yarwood, the comedian who specialises in "doubling" other celebrities.

After training as an actor at the Royal Academy of Dramatic Art, Mr. Ware worked in the Havoc Stunt Agency, which was often used on contract to television companies.

His skill for carrying out daring stunts has been shown to good effect on such small-screen favourites as "Z Cars," "Softly, Softly," "Manhunt" and "Dr. Who."