Hooray! The scary monsters and super freaks are back 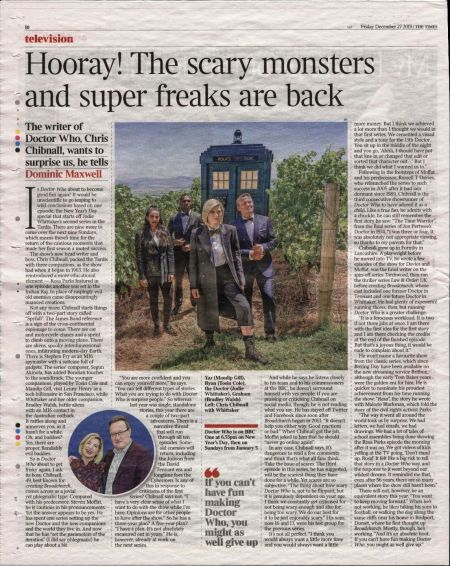 The writer of Doctor Who, Chris Chibnall, wants to surprise us, he tells Dominic Maxwell

Is Doctor Who about to become good fun again? It would be unscientific to go leaping to wild conclusions based on one episode, the New Year's Day special that starts off Jodie Whittaker's second series in the Tardis. There are nine more to come over the next nine Sundays, which means there's time for the return of the cautious moments that made her first season a muted success.

The show's new head writer and boss, Chris Chibnall, packed the Tardis with three companions, as the show had when it began in 1963. He also reintroduced a more educational element — Rosa Parks featured in one episode; another was set in the Indian Raj. In place of raspingly evil old enemies came disappointingly nuanced creations.

Not any more. Chibnall starts things off with a two-part story called "Spyfall". The James Bond reference is a sign of the cross-continental espionage to come. There are car and motorcycle chases and a sprint to climb onto a moving plane. There are aliens, spooky interdimensional ones, infiltrating modern-day Earth. There is Stephen Fry as an MI6 spymaster with a suitcase full of gadgets. The series' composer, Segun Akinola, has added Bondian touches to the soundtrack. The younger companions, played by Tosin Cole and Mandip Gill, visit Lenny Henry as a tech billionaire in San Francisco, while Whittaker and her older companion, Bradley Walsh, battle aliens with an MI6 contact in the Australian outback. It rattles along and unnerves you, as it hasn't for a while. Oh, and baddies? Yes, there are proper, fiendishly evil baddies.

So is Doctor Who about to get frisky again, I ask its boss. Chibnall, 49, best known for creating Broadchurch, comes across as a jovial yet phlegmatic type. Compared with his predecessor, Steven Moffat, he is cautious in his pronouncements. Yet the answer appears to be yes. He has spent one series setting up the new Doctor and the new companions and the world they live in. And now that he has "set the parameters of the iteration" (I did say phlegmatic) he can play about a bit.

"You are more confident and you can enjoy yourself more," he says. "You can tell different types of stories. What you are trying to do with Doctor Who is surprise people." So whereas last year was single, standalone stories, this year there are a couple of two-part adventures. There is a narrative thread that will run through all ten episodes. Some old enemies will return, including the Judoon from the David Tennant era and longtime foes the Cybermen. Is any of is in response to criticisms of the first series? Chibnall says not. "I have a very clear sense of what I want to do with the show while I'm here. Opinions are for other people to have after the show." So he has a three-year plan? A five-year plan? "I have a plan. It's not absolutely measured out in years." He is, however, already at work on the next series.

And while he says he listens closely to his team and to his commissioners at the BBC, he doesn't surround himself with yes people. If you are praising or criticising Chibnall on social media, though, he is not reading what you say. He has stayed off Twitter and Facebook since soon after Broadchurch began in 2013. "It doesn't help you either way. Good reactions or bad." When Chibnall got the job, Moffat joked to him that he should "never go online again".

In any case, Chibnall says, it's dangerous to read a few comments and think that's what all fans think. Take the issue of scares. The third episode in this series, he has suggested, will be the scariest thing they have done for a while. Yet scares are so subjective. "The thing about how scary Doctor Who is, not to be flippant, but it is genuinely dependent on your age. I think we constantly get criticised for not being scary enough and also for being too scary. We do our best for it to be just enjoyably scary." His sons, now 16 and 13, were his test group for the previous series.

It's not all perfect. "I think you would always want a little more time and you would always want a little more money. But I think we achieved a lot more than I thought we would in that first series. We cemented a visual style and a tone for the 13th Doctor. You sit up in the middle of the night and you go, Ahhh, I should have put that line in or changed that edit or sorted that character out But I think we did what I wanted us to."

Following in the footsteps of Moffat and his predecessor, Russell T Davies, who relaunched the series to such success in 2005 after it had lain dormant since 1989, Chibnall is the third consecutive showrunner of Doctor Who to have adored it as a child. Like a true fan, he admits with a chuckle, he can still remember the first story he saw: "The Time Warrior", from the final series of Jon Pertwee's Doctor in 1974. "I was three or four. It was absolutely not appropriate viewing, so thanks to my parents for that."

Chibnall grew up in Formby in Lancashire. A playwright before he moved into TV, he wrote a few episodes of the show for Davies and Moffat, was the head writer on the spin-off series Torchwood, then ran the thriller series Law & Order: UK before creating Broadchurch, whose cast included one former Doctor in Tennant and one future Doctor-in Whittaker. He had plenty of experience running shows, then, but running Doctor Who is a greater challenge.

"It is a ferocious workload. It is two if not three jobs at once. I am there with the first idea for the first story and I am there checking the credits at the end of the finished episode. But that's a joyous thing, it would be rude to complain about it."

He won't name a favourite show from the classic series, which since Boxing Day have been available on the new streaming service Britbox, although the early Tom Baker years were the golden era for him. He is quicker to nominate his proudest . achievement from his time running - the show: "Rosa", the story he wrote with Malorie Blackman, which told the story of the civil rights activist Parks.

"The way it went all around the world took us by surprise. We had letters, we had emails, we had drawings. We had a lot of tales of school assemblies being done showing the Rosa Parks episode the morning after it was on. We got videos of kids yelling at the TV going, 'Don't stand up, Rosa!' It felt like a big risk to tell that story in a Doctor Who way, and the response to it went beyond our wildest dreams. It reminded me that, even after 56 years, there are so many places where the show still hasn't been:'

There will not, however, be an equivalent story this year. "You want to keep moving forward." When he's not working, he likes taking his sons to football, or walking the dog along the same cliffs near his home in Bridport, Dorset, where he first thought up Broadchurch. Mostly, though, he's working. "And it's an absolute hoot. If you can't have fun making Doctor Who, you might as well give up."

Caption: Doctor Who is on BBC One at 6.55pm on New Year's Day, then on Sundays from January 5