How did the new Doctor do? 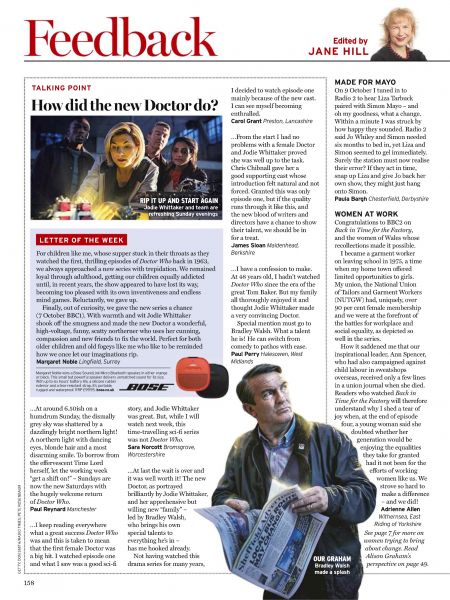 For children like me, whose supper stuck in their throats as they watched the first, thrilling episodes of Doctor Who back in 1963, we always approached a new series with trepidation. We remained loyal through adulthood, getting our children equally addicted until, in recent years, the show appeared to have lost its way, becoming too pleased with its own inventiveness and endless mind games. Reluctantly, we gave up.

Finally, out of curiosity, we gave the new series a chance (7 October BBC1). With warmth and wit Jodie Whittaker shook off the smugness and made the new Doctor a wonderful, high-voltage, funny, scatty northerner who uses her cunning, compassion and new friends to fix the world. Perfect for both older children and old fogeys like me who like to be reminded how we once let our imaginations rip.

...At around 6.50ish on a humdrum Sunday, the dismally grey sky was shattered by a dazzlingly bright northern light! A northern light with dancing eyes, blonde hair and a most disarming smile. To borrow from the effervescent Time Lord herself, let the working week "get a shift on!" - Sundays are now the new Saturdays with the hugely welcome return of Doctor Who.

...I keep reading everywhere what a great success Doctor Who was and this is taken to mean that the first female Doctor was a big hit. I watched episode one and what I saw was a good sci-fi story, and Jodie Whittaker was great. But, while I will watch next week, this time-travelling sci-fi series was not Doctor Who.

...At last the wait is over and it was well worth it! The new Doctor, as portrayed brilliantly by Jodie Whittaker, and her apprehensive but willing new "family" led by Bradley Walsh, who brings his own special talents to everything he's in has me hooked already.

Not having watched this drama series for many years, I decided to watch episode one mainly because of the new cast. I can see myself becoming enthralled.

...From the start I had no problems with a female Doctor and Jodie Whittaker proved she was well up to the task. Chris Chibnall gave her a good supporting cast whose introduction felt natural and not forced. Granted this was only episode one, but if the quality runs through it like this, and the new blood of writers and directors have a chance to show their talent, we should be in for a treat.

...I have a confession to make. At 48 years old, I hadn't watched Doctor Who since the era of the great Tom Baker. But my family all thoroughly enjoyed it and thought Jodie Whittaker made a very convincing Doctor.

Special mention must go to Bradley Walsh. What a talent he is! He can switch from comedy to pathos with ease.

Caption: RIP IT UP AND START AGAIN Jodie Whittaker and team are refreshing Sunday evenings

Caption: OUR GRAHAM Bradley Walsh made a splash