How robots-on-casters can still dominate TV 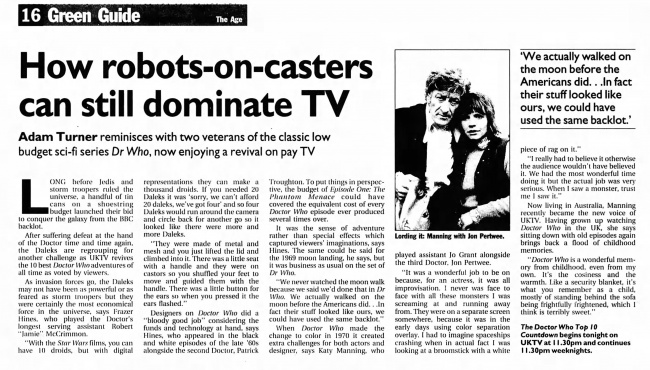 LONG before Jedis and storm troopers ruled the universe, a handful of tin cans on a shoestring budget launched their bid to conquer the galaxy from the BBC backlot.

After suffering defeat at the hand of the Doctor time and time again, the Daleks are regrouping for another challenge as UKTV revives the 10 best Doctor Who adventures of all time as voted by viewers.

As invasion forces go, the Daleks may not have been as powerful or as feared as storm troopers but they were certainly the most economical force in the universe, says Frazer Hines, who played the Doctor's longest serving assistant Robert "Jamie" McCrimmon.

"With the Star Wars films, you can have 10 droids, but with digital representations they can make a thousand droids. If you needed 20 Daleks it was 'sorry, we can't afford 20 daleks, we've got four' and so four Daleks would run around the camera and circle back for another go so it looked like there were more and more Daleks.

"They were made of metal and mesh and you just lifted the lid and climbed into it. There was a little seat with a handle and they were on castors so you shuffled your feet to move and guided them with the handle. There was a little button for the ears so when you pressed it the ears flashed."

Designers on Doctor Who did a "bloody good job" considering the funds and technology at hand, says Hines, who appeared in the black and white episodes of the late '60s alongside the second Doctor, Patrick Troughton. To put things in perspective, the budget of Episode One: The Phantom Menace could have covered the equivalent cost of every Doctor Who episode ever produced several times over.

It was the sense of adventure rather than special effects which captured viewers' imaginations, says Hines. The same could be said for the 1969 moon landing, he says, but it was business as usual on the set of Dr Who.

"We never watched the moon walk because we said we'd done that in Dr Who. We actually walked on the moon before the Americans did...In fact their stuff looked like ours, we could have used the same backlot."

When Doctor Who made the change to color in 1970 it created extra challenges for both actors and designer, says Katy Manning, who played assistant Jo Grant alongside the third Doctor, Jon Pertwee.

"It was a wonderful job to be on because, for an actress, it was all improvisation. I never was face to face with all these monsters I was screaming at and running away from. They were on a separate screen somewhere, because it was in the early days using color separation overlay. I had to imagine spaceships crashing when in actual fact I was looking at a broomstick with a white piece of rag on it."

"I really had to believe it otherwise the audience wouldn't have believed it. We had the most wonderful time doing it but the actual job was very serious. When I saw a monster, trust me I saw it."

Now living in Australia, Manning recently became the new voice of UKTV. Having grown up watching Doctor Who in the UK, she says sitting down with old episodes again brings back a flood of childhood memories.

"Doctor Who is a wonderful memory from childhood, even from my own. It's the cosiness and the warmth. Like a security blanket, it's what you remember as a child, mostly of standing behind the sofa being frightfully frightened, which I think is terribly sweet."

The Doctor Who Top 10 Countdown begins tonight on UKTV at 11.30pm and continues 11.30pm weeknights.