Difference between revisions of "I Was Nearly Zapped By Doctor Who!" 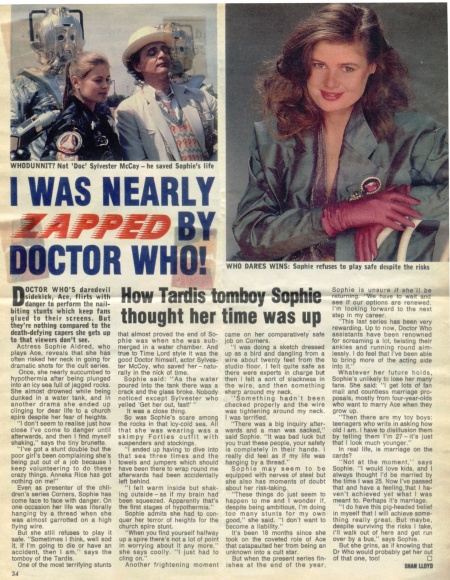 How Tardis tomboy Sophie thought her time was up

DOCTOR WHO'S daredevil sidekick, Ace, flirts with danger to perform the nail-biting stunts which keep fans glued to their screens. But they're nothing compared to the death-defying capers she gets up to that viewers don't see.

Actress Sophie Aldred, who plays Ace, reveals that she has often risked her neck in going for dramatic shots for the cult series.

Once, she nearly succumbed to hypothermia after being plunged into an icy sea full of jagged rocks. She almost drowned while being dunked in a water tank, and in another drama she ended up clinging for dear life to a church spire despite her fear of heights.

"I don't seem to realise just how close I've come to danger until afterwards, and then I find myself shaking," says the tiny brunette.

"I've got a stunt double but the poor girl's been complaining she's being put out of a job because I keep volunteering to do these crazy things. Anneka Rice has got nothing on me!"

Even as presenter of the children's series Corners, Sophie has come face to face with danger. On one occasion her life was literally hanging by a thread when she was almost garrotted on a high flying wire.

But she still refuses to play it safe. "Sometimes I think, well sod it, if I'm going to die or have an accident, then I am," says the tomboy of the Tardis.

One of the most terrifying stunts that almost proved the end of Sophie was when she was submerged in a water chamber. And true to Time Lord style it was the good Doctor himself, actor Sylvester McCoy, who saved her -naturally in the nick of time.

Sophie said: "As the water poured into the tank there was a crack and the glass broke. Nobody noticed except Sylvester who yelled 'Get her out, fast!' "

It was a close thing.

So was Sophie's scare among the rocks in that icy-cold sea. All that she was wearing was a skimpy Forties outfit with suspenders and stockings.

"I ended up having to dive into that sea three times and the towels and jumpers which should have been there to wrap round me afterwards had been accidentally left behind.

"I felt warm inside but shaking outside - as if my brain had been squeezed. Apparently that's the first stages of hypothermia."

Sophie admits she had to conquer her terror of heights for the church spire stunt.

"When you find yourself halfway up a spire there's not a lot of point in worrying about it any more," she says coolly. "I just had to cling on."

Another frightening moment came on her comparatively safe job on Corners.

"I was doing a sketch dressed up as a bird and dangling from a wire about twenty feet from the studio floor. I felt quite safe as there were experts in charge but then I felt a sort of slackness in the wire, and then something sharp around my neck.

"Something hadn't been checked properly and the wire was tightening around my neck. I was terrified.

"There was a big inquiry afterwards and a man was sacked," said Sophie. "It was bad luck but you trust these people, your safety is completely in their hands. I really did feel as if my life was hanging by a thread."

Sophie may seem to be equipped with nerves of steel but she also has moments of doubt about her risk-taking.

"These things do just seem to happen to me and I wonder if, despite being ambitious, I'm doing too many stunts for my own good," she said. "I don't want to become a liability."

It's been 18 months since she took on the coveted role of Ace that catapaulted her from being an unknown into a cult star.

But when the present series finishes at the end of the year, Sophie is unsure if she'll be returning. "We have to watch and see if our options are renewed. I'm looking forward to the next step in my career.

"This last series has been very rewarding. Up to now, Doctor Who assistants have been renowned for screaming a lot, twisting their ankles and running round aimlessly. I do feel that I've been able to bring more of the acting side into it."

Whatever her future holds, Sophie's unlikely to lose her many fans. She said: "I get lots of fan mail and countless marriage proposals, mostly from four-year-olds who want to marry Ace when they grow up.

"Then there are my toy boys: teenagers who write in asking how old I am. I have to disillusion them by telling them I'm 27 - it's just that I look much younger."

In real life, is marriage on the cards?

"Not at the moment," says Sophie. "I would love kids, and I always thought I'd be married by the time I was 25. Now I've passed that and have a feeling that I haven't achieved yet what I was meant to. Perhaps it's marriage.

"I do have this pig-headed belief in myself that I will achieve something really great. But maybe, despite surviving the risks I take, I'll walk out of here and get run over by a bus," says Sophie.

But she grins, as if knowing that Dr Who would probably get her out of that one, too!

WHO DARES WINS: Sophie refuses to play safe despite the risks