I am not Spock: how some actors never manage to escape from their most famous characters 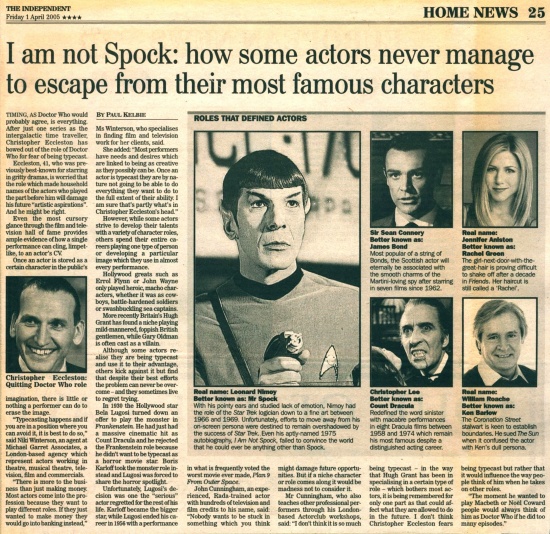 TIMING, AS Doctor Who would probably agree, is everything. After just one series as the intergalactic time traveller, Christopher Eccleston has bowed out of the role of Doctor Who for fear of being typecast.

Eccleston, 41, who was previously best-known for starring in gritty dramas, is worried that the role which made household names of the actors who played the part before him will damage his future "artistic aspirations". And he might be right.

Even the most cursory glance through the film and television hall of fame provides ample evidence of how a single performance can cling, limpet-like, to an actor's CV.

Once an actor is stored as a certain character in the public's imagination, there is little or nothing a performer can do to erase the image.

"Typecasting happens and if you are in a position where you can avoid it, it is best to do so," said Niki Winterson, an agent at Michael Garret Associates, a London-based agency which represent actors working in theatre, musical theatre, television, film and commercials.

"There is more to the business than just making money. Most actors come into the profession because they want to play different roles. If they just wanted to make money they would go into banking instead," Ms Winterson, who specialises in finding film and television work for her clients, said.

She added: "Most performers have needs and desires which are linked to being as creative as they possibly can be. Once an actor is typecast they are by nature not going to be able to do everything they want to do to the full extent of their ability. I am sure that's partly what's in Christopher Eccleston's head."

However, while some actors strive to develop their talents with a variety of character roles, others spend their entire careers playing one type of person or developing a particular image which they use in almost every performance.

Hollywood greats such as Errol Flynn or John Wayne only played heroic, macho characters, whether it was as cowboys, battle-hardened soldiers or swashbuckling sea captains.

Although some actors realise they are being typecast and use it to their advantage, others kick against it but find that despite their best efforts the problem can never be overcome - and they sometimes live to regret trying.

In 1930 the Hollywood star Bela Lugosi turned down an offer to play the monster in Frankenstein. He had just had a massive cinematic hit as Count Dracula and he rejected the Frankenstein role because he didn't want to be typecast as a horror movie star. Boris Karloff took the monster role instead and Lugosi was forced to share the horror spotlight.

Unfortunately, Lugosi's decision was one the "serious" actor regretted for the rest of his life. Karloff became the bigger star, while Lugosi ended his career in 1956 with a performance in what is frequently voted the worst movie ever made, Plan 9 From Outer Space.

John Cunningham, an experienced, Rada-trained actor with hundreds of television and film credits to his name, said: "Nobody wants to be stuck in something which you think might damage future opportunities. But if a niche character or role comes along it would be madness not to consider it.

Mr Cunningham, who also teaches other professional performers through his London-based Actorclub workshops, said: "I don't think it is so much being typecast - in the way that Hugh Grant has been in specialising in a certain type of role - which bothers most actors, it is being remembered for only one part as that could affect what they are allowed to do in the future. I don't think Christopher Eccleston fears being typecast but rather that it would influence the way people think of him when he takes on other roles.

"The moment he wanted to play Macbeth or Noel Coward people would always think of him as Doctor Who if he did too many episodes."

With his pointy ears and studied lack of emotion, Nimoy had the role of the Star Trek logician down to a fine art between 1966 and 1969. Unfortunately, efforts to move away from his on-screen persona were destined to remain overshadowed by the success of Star Trek. Even his aptly-named 1975 autobiography, I Am Not Spock, failed to convince the world that he could ever be anything other than Spock.

Most popular of a string of Bonds, the Scottish actor will eternally be associated with the smooth charms of the Martini-loving spy after starring in seven films since 1962.

The girl-next-door-with-the-great-hair is proving difficult to shake off after a decade in Friends. Her haircut is still called a 'Rachel'.

Redefined the word sinister with macabre performances in eight Dracula films between 1958 and 1974 which remain his most famous despite a distinguished acting career.

The Coronation Street stalwart is keen to establish boundaries. He sued The Sun when it confused the actor with Ken's dull persona.