I cried my eyes out! 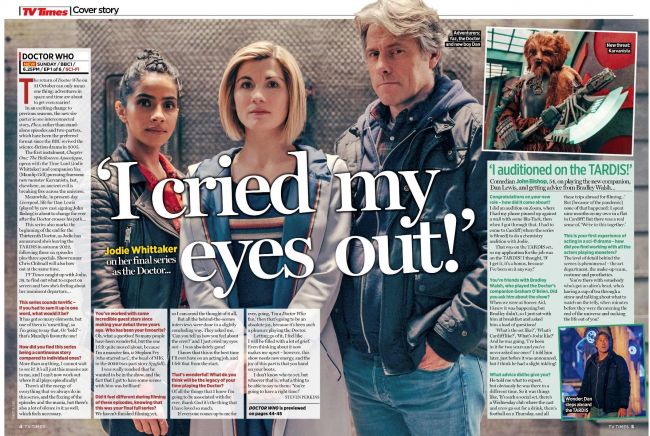 The return of Doctor Who on 31 October can only mean one thing: adventures in space and time are about to get even scarier!

In an exciting change to previous seasons, the new six-parter is one interconnected story, Flux, rather than standalone episodes and two-parters, which have been the preferred format since the BBC revived the science-fiction drama in 2005.

The first instalment, Chapter One: The Halloween Apocalypse, opens with the Time Lord (Jodie Whittaker) and companion Yaz (Mandip Gill) pursuing fearsome new monster Karvanista, but, elsewhere, an ancient evil is breaking free across the universe.

Meanwhile, in present-day Liverpool, life for Dan Lewis (played by new cast signing John Bishop) is about to change for ever after the Doctor crosses his path...

This series also marks the beginning of the end for the Thirteenth Doctor, as Jodie has announced she's leaving the TARDIS in autumn 2022, following these six episodes plus three specials. Showrunner Chris Chibnall will also bow out at the same time.

TV Times caught up with Jodie, 39, to find out what to expect on screen and how she's feeling about her imminent departure...

This series sounds terrific if you had to sum it up in one word, what would it be?

It has got so many elements, but one of them is 'unsettling', so I'm going to say that. Or 'bold' that's Mandip's favourite one!

How did you find this series being a continuous story compared to individual ones?

More than anything, I cannot wait to see it! It's all just this massive arc to me, and I can't now work out where it all plays episodically!

There's all the energy of everything that we always do in this series, and the fizzing of the episodes and the mania, but there's also a lot of silence in it as well, which feels necessary.

You've worked with some incredible guest stars since making your debut three years ago. Who has been your favourite?

Oh, what a question! So many people have been wonderful, but the one I felt quite moved about, because I'm a massive fan, is Stephen Fry [who starred as C, the head of MI6, in the 2020 two-part story Spyfall].

I was really touched that he wanted to be in the show, and the fact that I got to have some scenes with him was brilliant!

Did it feel different during filming of these episodes, knowing that this was your final full series? We haven't finished filming yet, so I can avoid the thought of it all.

But all the behind-the-scenes interviews were done in a slightly concluding way. They asked me, 'Can you tell us how you feel about the crew?' and I just cried my eyes out - I was absolutely gone!

I know that this is the best time I'll ever have on an acting job, and I felt that from the start.

That's wonderful! What do you think will be the legacy of your time playing the Doctor? Of all the things that I know I'm going to be associated with for ever, thank God it's the thing that I have loved so much.

If everyone comes up to me for ever, going, 'I'm a Doctor Who fan,' then that's going to be an absolute joy, because it's been such a pleasure playing the Doctor.

Letting go of it, I feel like I will be filled with a lot of grief. Even thinking about it now makes me upset - however, this show needs new energy, and the joy of this part is that you hand on your boots.

I don't know who to yet, but whoever that is, what a thing to be able to say to them: 'You're going to have a right time!'

DOCTOR WHO is previewed on pages 44-45

I auditioned on the TARDIS!

Dan Lewis, and getting advice from Bradley Walsh...

Congratulations on your new role - how did it come about?

I did an audition on Zoom, where I had my phone pinned up against a wall with some Blu-Tack, then when I got through that, I had to come to Cardiff [where the series is filmed] to do a chemistry audition with Jodie.

You're friends with Bradley Walsh, who played the Doctor's companion Graham O'Brien. Did you ask him about the show?

When we were at Soccer Aid, I knew it was happening but Bradley didn't, so I just sat with him at breakfast and asked him a load of questions!

'What's the set like?', 'What's Cardiff like?', 'What's Jodie like?' And he was going, 'I've been in it for two years and you've never asked me once!' I told him later, just before it was announced, but I think he had a slight inkling!

What advice did he give you?

He told me what to expect, but obviously he was there in a different time. So it was things like, 'It's such a social set, there's a Wednesday club where the cast and crew go out for a drink, there's football on a Thursday, and all these trips abroad for filming...' But [because of the pandemic] none of that happened; I spent nine months on my own in a flat in Cardiff! But there was a real sense of, 'We're in this together.'

This is your first experience of acting in a sci-fi drama - how did you find working with all the actors playing monsters?

The level of detail behind the scenes is phenomenal - the art department, the make-up team, costume and prosthetics.

You're there with somebody who's got an alien's head, who's having a cup of tea through a straw and talking about what to watch on the telly, when minutes before they were threatening the end of the universe and sucking the life out of you!