I did cool, evil things to Doctor Who 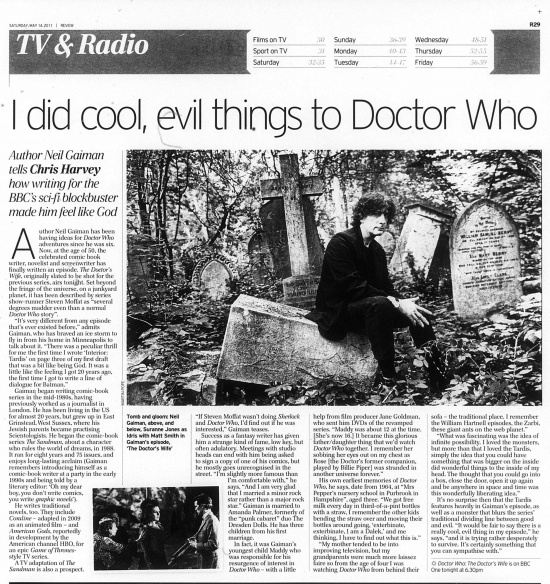 Author Neil Gaiman has been having ideas for Doctor Who adventures since he was six. Now, at the age of 50, the celebrated comic book writer, novelist and screenwriter has finally written an episode. The Doctor's Wife, originally slated to be shot for the previous series, airs tonight. Set beyond the fringe of the universe, on a junkyard planet, it has been described by series show-runner Steven Moffat as "several degrees madder even than a normal Doctor Who story".

"It's very different from any episode that's ever existed before," admits Gaiman, who has braved an ice storm to fly in from his home in Minneapolis to talk about it. "There was a peculiar thrill for me the first time I wrote 'Interior: Tardis' on page three of my first draft that was a bit like being God. It was a little like the feeling I got 20 years ago, the first time I got to write a line of dialogue for Batman."

Gaiman began writing comic-book series in the mid-1980s, having previously worked as a journalist in London. He has been living in the US for almost 20 years, but grew up in East Grinstead, West Sussex, where his Jewish parents became practising Scientologists. He began the comic-book series The Sandman, about a character who rules the world of dreams, in 1988. It ran for eight years and 75 issues, and enjoys long-lasting acclaim (Gaiman remembers introducing himself as a comic-book writer at a party in the early 1990s and being told by a literary editor: 'Oh my dear boy, you don't write comics, you write graphic novels').

He writes traditional novels, too. They include Coraline - adapted in 2009 as an animated film - and American Gods, reportedly in development by the American channel HBO, for an epic Game of Thrones-style TV series.

A TV adaptation of The Sandman is also a prospect.

"If Steven Moffat wasn't doing Sherlock and Doctor Who, I'd find out if he was interested," Gaiman teases.

Success as a fantasy writer has given him a strange kind of fame, low key, but often adulatory. Meetings with studio heads can end with him being asked to sign a copy of one of his comics, but he mostly goes unrecognised in the street. "I'm slightly more famous than I'm comfortable with," he says, "And I am very glad that I married a minor rock star rather than a major rock star." Gaiman is married to Amanda Palmer, formerly of the "punk cabaret" duo The Dresden Dolls. He has three children from his first marriage.

In fact, it was Gaiman's youngest child Maddy who was responsible for his resurgence of interest in Doctor Who - with a little help from film producer Jane Goldman, who sent him DVDs of the revamped series. "Maddy was about 12 at the time. [She's now 16.] It became this glorious father/daughter thing that we'd watch Doctor Who together. I remember her sobbing her eyes out on my chest as Rose [the Doctor's former companion, played by Billie Piper] was stranded in another universe forever."

His own earliest memories of Doctor Who, he says, date from 1964, at "Mrs Pepper's nursery school in Purbrook in Hampshire", aged three. "We got free milk every day in third-of-a-pint bottles with a straw, I remember the other kids bending the straw over and moving their bottles around going, 'exterbinate, exterbinate, I am a Dalek,' and me thinking, I have to find out what this is."

"My mother tended to be into improving television, but my grandparents were much more laissez faire so from the age of four I was watching Doctor Who from behind their sofa - the traditional place. I remember the William Hartnell episodes, the Zarbi, these giant ants on the web planet."

"What was fascinating was the idea of infinite possibility. I loved the monsters, but more than that I loved the Tardis, simply the idea that you could have something that was bigger on the inside did wonderful things to the inside of my head. The thought that you could go into a box, close the door, open it up again and be anywhere in space and time was this wonderfully liberating idea."

It's no surprise then that the Tardis features heavily in Gaiman's episode, as well as a monster that blurs the series' traditional dividing line between good and evil. "It would be fair to say there is a really cool, evil thing in my episode," he says, "and it is trying rather desperately to survive. It's certainly something that you can sympathise with."

Doctor Who: The Doctor's Wife is on BBC One tonight at 6.30pm

GRAPHIC: Tomb and gloom: Neil Gaiman, above, and below, Suranne Jones as Idris with Matt Smith in Gaiman's episode, 'The Doctor's Wife'