I think a female Doctor would be really thrilling 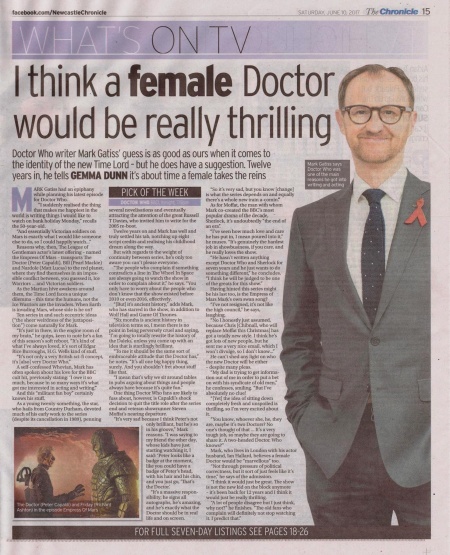 Doctor Who writer Mark Gatiss' guess is as good as ours when it comes to the identity of the new Time Lord - but he does have a suggestion. Twelve years in, he tells LEMMA DUNN it's about time a female takes the reins

MARK Gatiss had an epiphany while planning his latest episode for Doctor Who.

"I suddenly realised the thing that makes me happiest in the world is writing things I would like to watch on bank holiday Monday," recalls the 50-year-old.

"And essentially Victorian soldiers on Mars is exactly what I would like someone else to do, so I could happily watch..."

Reasons why, then, The League of Gentleman actor's latest offering - named the Empress Of Mars - transports The Doctor (Peter Capaldi), Bill (Pearl Mackie) and Nardole (Matt Lucas) to the red planet, where they find themselves in an impossible conflict between, you guessed it, Ice Warriors ... and Victorian soldiers.

As the Martian hive awakens around them, the Time Lord faces a unique dilemma - this time the humans, not the Ice Warriors are the invaders. When Earth is invading Mars, whose side is he on?

Ten series in and such eccentric ideas ("the sheer weirdness of the juxtaposition") come naturally for Mark.

"It's just in there, in the engine room of my brain;' he quips, keen to note he's a fan of this season's soft reboot. "It's kind of what I've always loved, it's sort of Edgar Rice Burroughs, H.G. Wells kind of stuff.

"It's not only a very British sci-fi concept, it's [also] very Doctor Who."

A self-confessed Whovian, Mark has often spoken about his love for the BBC cult hit, previously stating: 'I owe it so much, because in so many ways it's what got me interested in acting and writing!'

And this "militant fan boy" certainly knows his stuff.

As a young twenty-something, the star, who hails from Country Durham, devoted much of his early work to the series (despite its cancellation in 1989), penning several novelisations and eventually attracting the attention of the great Russell T Davies, who invited him to write for the 2005 re-boot.

Twelve years on and Mark has well and truly settled his tab, notching up eight script credits and realising his childhood dream along the way.

But with regards to the weight of continuity between series, he's only too aware you can't please everyone.

"The people who complain if something contradicts a line in The Wheel In Space are always going to watch the show in order to complain about it," he says. "You only have to worry about the people who don't know that the show existed before 2010 or even-2016, effectively.

"[But] it's ancient history," adds Mark, who has starred in the show, in addition to Wolf Hall and Game Of Thrones.

"Six months is ancient history in television terms so, I mean there is no point in being perversely cruel and saying, 'I'm going to totally rewrite the history of the Daleks: unless you come up with an idea that is startlingly brilliant.

"To me it should be the same sort of embraceable attitude that the Doctor has;' he notes. "It's all one big happy thing, surely. And you shouldn't fret about stuff like that.

"I mean that's why we sit around tables in pubs arguing about things and people always have because it's quite fun:'

One thing Doctor Who fans are likely to fuss about, however, is Capaldi's shock decision to quit the title role after the series end and veteran showrunner Steven Moffat's nearing departure.

"It's very sad because I think Peter's not only brilliant, but he's so in his groove;' Mark reasons. "I was saying to my friend the other day, whose kids have just starting watching it, I said: 'Peter looks like a badge at the moment, like you could have a badge of Peter's head, with his hair and his chin, and you just go, 'That's the Doctor!

"It's a massive responsibility; he signs all autographs, he's amazing, and he's exactly what the Doctor should be in real life and on screen. "So it's very sad, but you know [change] is what the series depends on and equally there's a whole new train a-comin."

As for Moffat, the man with whom Mark co-created the BBC's most popular drama of the decade, Sherlock, it's undoubtedly "the end of an era".

"I've seen how much love and care he has put in, I mean poured into it," he muses. "It's genuinely the hardest job in showbusiness, if you care, and he really loves the show.

"He hasn't written anything except Doctor Who and Sherlock for seven years and he just wants to do something different,' he concludes. "I think he will be judged to be one of the greats for this show."

Having hinted this series might be his last too, is the Empress of Mars Mark's own swan song?

"I've not resigned, it's not like the high council," he says, laughing.

"No I honestly just assumed, because Chris [Chibnall, who will replace Moffat this Christmas] has got a totally new style. I think he's got lots of new people, but he sent me a very nice email, which I won't divulge, so I don't know..."

He can't shed any light on who the new Doctor will be either - despite many pleas.

"My dad is trying to get information out of me in order to put a bet on with his syndicate of old men," he confesses, smiling. "But I've absolutely no clue!

"[Yet] the idea of sitting down completely fresh and unspoiled is thrilling, so I'm very excited about it.

"You know, whoever she, he, they are, maybe it's two Doctors? No one's thought of that ... It's a very tough job, so maybe they are going to share it. A two-headed Doctor. Who knows?"

Mark, who lives in London with his actor husband, Ian Hallard, believes a female Doctor would be "marvellous" too.

"Not through pressure of political correctness, but it sort of just feels like it's time," he says of the admission.

"A lot of people disagree but I just think, why not?" he finishes. "The old fans who complain will definitely not stop watching it. I predict that."

Caption: The Doctor (Peter Capaldi) and Friday (Richard Ashton) in the episode Empress Of Mars

Caption: Mark Gatiss says Doctor Who was one of the main reasons he got into writing and acting