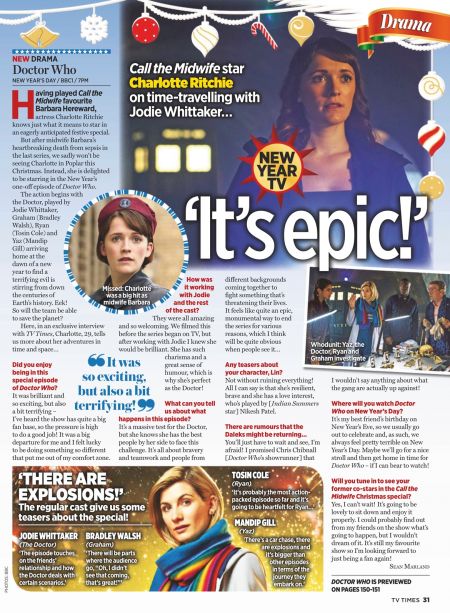 But after midwife Barbara's heartbreaking death from sepsis in the last series, we sadly won't be seeing Charlotte in Poplar this Christmas. Instead, she is delighted to be starring in the New Year's one-off episode of Doctor Who.

The action begins with the Doctor, played by Jodie Whittaker, Graham (Bradley Walsh), Ryan (Tosin Cole) and Yaz (Mandip Gill) arriving home at the dawn of a new year to find a terrifying evil is stirring from down the centuries of Earth's history. Eek! So will the team be able to save the planet?

Here, in an exclusive interview with TV Times, Charlotte, 29, tells us more about her adventures in time and space...

Did you enjoy being in this special episode of Doctor Who?

It was brilliant and so exciting, but also a bit terrifying I've heard the show has quite a big fan base, so the pressure is high to do a good job! It was a big departure for me and I felt lucky to be doing something so different that put me out of my comfort zone.

I wouldn't say anything about what the gang are actually up against!

How was it working with Jodie and the rest of the cast?

They were all amazing and so welcoming. We filmed this before the series began on TV, but after working with Jodie I knew she would be brilliant. She has such charisma and a great sense of humour, which is why she's perfect as the Doctor!

What can you tell us about what happens in this episode?

It's a massive test for the Doctor, but she knows she has the best people by her side to face this challenge. It's all about bravery and teamwork and people from different backgrounds coming together to fight something that's threatening their lives. It feels like quite an epic, monumental way to end the series for various reasons, which I think will be quite obvious when people see it...

Any teasers about your character, Lin?

Not without ruining everything! All I can say is that she's resilient, brave and she has a love interest, who's played by [Indian Summers star] Nikesh Patel.

There are rumours that the Daleks might be returning...

You'll just have to wait and see, I'm afraid! I promised Chris Chibnall [Doctor Who's showrunner] that I wouldn't say anything about what the gang are actually up against!

Where will you watch Doctor Who on New Year's Day?

It's my best friend's birthday on New Year's Eve, so we usually go out to celebrate and, as such, we always feel pretty terrible on New Year's Day. Maybe we'll go for a nice stroll and then get home in time for Doctor Who - if I can bear to watch!

Will you tune in to see your former co-stars in the Call the Midwife Christmas special?

Yes, I can't wait! It's going to be lovely to sit down and enjoy it properly. I could probably find out from my friends on the show what's going to happen, but I wouldn't dream of it. It's still my favourite show so I'm looking forward to just being a fan again!

Caption: Missed: Charlotte as a big hit as midwife Barbara

The regular cast give us some teasers about the special!

'The episode touches on the friends' relationship and how the Doctor deals with certain scenarios.'

'There will be parts where the audience go, "Oh, I didn't see that coming, that's great!"

'It's probably the most action-packed episode so far and it's going to be heartfelt for Ryan...'

'There's a car chase, there are explosions and it's bigger than other episodes in terms of the journey they embark on.'