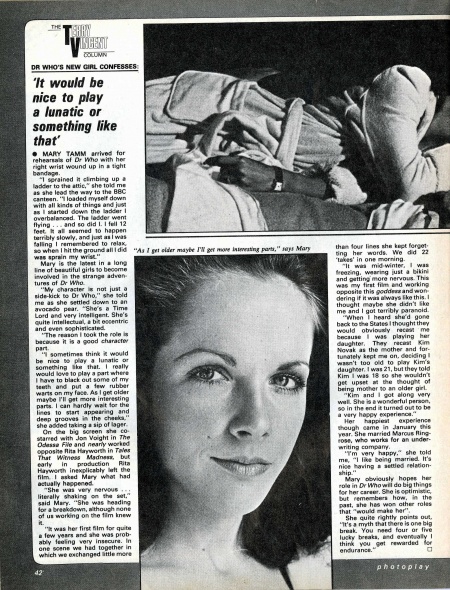 MARY TAMM arrived for rehearsals of Dr Who with her right wrist wound up in a tight bandage.

"I sprained it climbing up a ladder to the attic," she told me as she lead the way to the BBC canteen. "I loaded myself down with all kinds of things and just as I started down the ladder I overbalanced. The ladder went flying ... and so did I. I fell 12 feet. It all seemed to happen terribly slowly, and just as I was falling I remembered to relax, so when I hit the ground all did was sprain my wrist."

Mary is the latest in a long line of beautiful girls to become involved in the strange adventures of Dr Who.

"My character is not just a side-kick to Dr Who," she told me as she settled down to an avocado pear. "She's a Time Lord and very intelligent. She's quite intellectual, a bit eccentric and even sophisticated.

"The reason I took the role is because it is a good character part.

"I sometimes think it would be nice to play a lunatic or something like that. I really would love to play a part where I have to black out some of my teeth and put a few rubber warts on my face. As I get older maybe I'll get more interesting parts. I can hardly wait for the lines to start appearing and deep grooves in the cheeks," she added taking a sip of lager.

On the big screen she costarred with Jon Voight in The Odessa File and nearly worked opposite Rita Hayworth in Tales That Witness Madness, but early in production Rita Hayworth inexplicably left the film. I asked Mary what had actually happened.

"She was very nervous .. . literally shaking on the set," said Mary. "She was heading for a breakdown, although none of us working on the film knew it.

"It was her first film for quite a few years and she was probably feeling very insecure. In one scene we had together in which we exchanged little more than four lines she kept forgetting her words. We did 22 'takes' in one morning.

"It was mid-winter, I was freezing, wearing just a bikini and getting more nervous. This was my first film and working opposite this goddess and wondering if it was always like this. I thought maybe she didn't like me and I got terribly paranoid. "When I heard she'd gone back to the States I thought they would obviously recast me because I was playing her daughter. They recast Kim Novak as the mother and fortunately kept me on, deciding I wasn't too old to play Kim's daughter. I was 21, but they told Kim I was 18 so she wouldn't get upset at the thought of being mother to an older girl. "Kim and I got along very well. She is a wonderful person, so in the end it turned out to be a very happy experience."

Her happiest experience though came in January this year. She married Marcus Ring-rose, who works for an underwriting company.

"I'm very happy," she told me, "I like being married. It's nice having a settled relationship."

Mary obviously hopes her role in Dr Who will do big things for her career. She is optimistic, but remembers how, in the past, she has won other roles that "would make her".

She quite rightly points out, "It's a myth that there is one big break. You need four or five lucky breaks, and eventually I think you get rewarded for endurance."

Caption: "As I get older maybe I'll get more interesting parts," says Mary