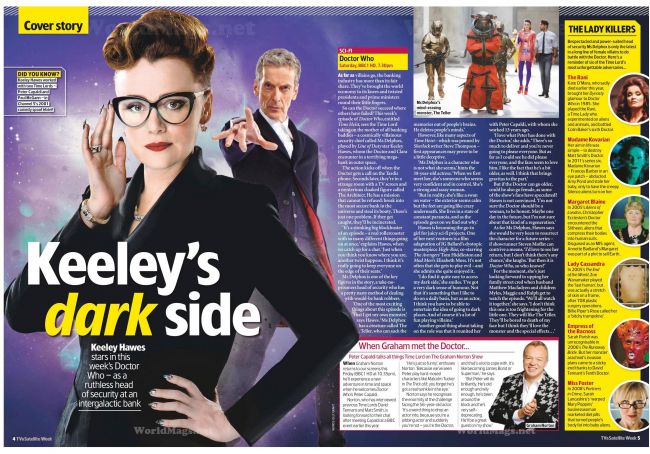 As far as villains go, the banking industry has more than its fair share. They've brought the world economy to its knees and twisted presidents and prime ministers round their little fingers.

So can the Doctor succeed where others have failed? This week's episode of Doctor Who, entitled Time Heist, sees the Time Lord taking on the mother of all banking baddies — a cosmically villainous security chief called Ms Delphox, played by Line of Duty star Keeley Hawes, whom the Doctor and Clara encounter in a terrifying mega-bank in outer space.

The action kicks off when the Doctor gets a call on the Tardis phone. Seconds later, they're in a strange room with a TV screen and a mysterious cloaked figure called The Architect. He has a mission that cannot be refused: break into the most secure bank in the universe and steal its booty. There's just one problem. If they get caught, they'll be incinerated.

'It's a stonking big blockbuster of an episode — a real rollercoaster with so many different things going on at once,' explains Hawes, when we catch up for a chat:Just when you think you know where you are, another twist happens. I think it's really going to keep everyone on the edge of their seats.'

Ms Delphox is one of the key figures in the story, a take-no-prisoners head of security who has a pretty nasty method of dealing with would-be bank robbers.

'One of the most exciting things about this episode is that I get my own monster,' says Hawes. 'Ms Delphox has a creature called The Teller, who can suck the memories out of people's brains. He deletes people's minds.'

However, like many aspects of Time Heist — which was penned by Sherlock writer Steve Thompson — first appearances may prove to be a little deceptive.

'Ms Delphox is a character who is not what she seems; hints the 38-year-old actress. 'When we first meet her, she's someone who seems very confident and in control. She's a strong and sassy woman.

'But in reality, she's like a swan on water — the exterior seems calm but the feet are going like crazy underneath. She lives in a state of constant paranoia, and as the episode goes on we find out why.'

Hawes is becoming the go-to girl for juicy sci-fi projects. One of her next ventures is a film adaptation of JG Ballard's dystopic masterpiece High-Rise, co-starring The Avengers' Tom Hiddleston and Mad Men's Elisabeth Moss. It's not often that she gets to play evil — and she admits she quite enjoyed it.

'I do find it quite easy to access my dark side: she smiles. 'I've got a very dark sense of humour. Not that it's something that I like to do on a daily basis, but as an actor, I think you have to be able to entertain the idea of going to dark places. And of course it's a lot of fun playing villains.'

Another good thing about taking on the role was that it reunited her with Peter Capaldi, with whom she worked 13 years ago.

'I love what Peter has done with the Doctor: she adds. 'There's so much to deliver and you're never going to please everyone. But as far as I could see he did please everyone, and the fans seem to love him. I like the fact that he's a bit older, as well. I think that brings gravitas to the part.'

But if the Doctor can go older, could he also go female, as some of the show's fans have speculated? Hawes is not convinced. 'I'm not sure the Doctor should be a woman, to be honest. Maybe one day in the future, but I'm not sure about that kind of a regeneration.'

As for Ms Delphox, Hawes says she would be very keen to resurrect the character for a future series — if showrunner Steven Moffat can contrive a means. 'I'd love to see her return, but I don't think there's any chance: she laughs. 'But then it is Doctor Who, so who knows?'

For the moment, she's just looking forward to upping her family street cred when husband Matthew Macfadyen and children Myles, Maggie and Ralph get to watch the episode. 'We'll all watch it together: she says. 'I don't think this one is too frightening for the little one. They will like The Teller. They'll be bored to death of my face but I think they'll love the monster and the special effects...'

When Graham met the Doctor...

When Graham Norton returns to our screens this Friday (BBC1 HD at 10.35pm), he'll experience a new adventure in time and space when he welcomes Doctor Who's Peter Capaldi.

Norton, who has interviewed previous Time Lords David Tennant and Matt Smith, is looking forward to their chat after meeting Capaldi at a BBC event earlier this year. 'He's just so funny,' enthuses Norton. 'Because we've seen Peter play hard-nosed characters like Malcolm Tucker in The Thick of lt, you forget he's got a real twinkle in the eye.'

Norton says he recognises the enormity of the challenge facing the 56-year-old actor. 'It's a weird thing to drop an actor into, because you're a jobbing actor and suddenly you're not — you're the Doctor, and that's a lot to cope with. It's like becoming James Bond or Superman,' he says.

'But Peter will do brilliantly. He's old enough and wily enough, he's been around the block and he's very self-deprecating. He'll be a great guest on my show.'

Bespectacled and power-suited head of security Ms Delphox is only the latest in a long line of female villains to do battle with the Doctor. Here's a reminder of six of the Time Lord's most unforgettable adversaries...

Kate O'Mara, who sadly died earlier this year, brought her Dynasty glamour to Doctor Who in 1985. She played the Rani, a Time Lady who experimented on aliens and animals, and battled Colin Baker's sixth Doctor.

Her aim in life was simple — to destroy Matt Smith's Doctor. In 2011's series six, Madame Kovarian — Frances Barber in an eye patch — abducted Amy Pond and stole her baby, only to have the creepy Silence aliens turn on her.

In 2005'skiens of London, Christopher Eccleston's Doctor encountered the Slitheen, aliens that compress their bodies into human suits. Disguised as an MI5 agent, Annette Badland's Margaret was part of a plot to sell Earth.

In 2005's The End of the World, Zoe Wanamaker played the 'last human', but was actually a stretch of skin on a frame, after 708 plastic surgery operations. Billie Piper's Rose called her a 'bitchy trampoline'.

Sarah Parish was unrecognisable in 2006's The Runaway Bride. But her monster arachnid's invasion plans came to a sticky end thanks to David Tennant's Tenth Doctor.