Live long and prosper and may the force be with you 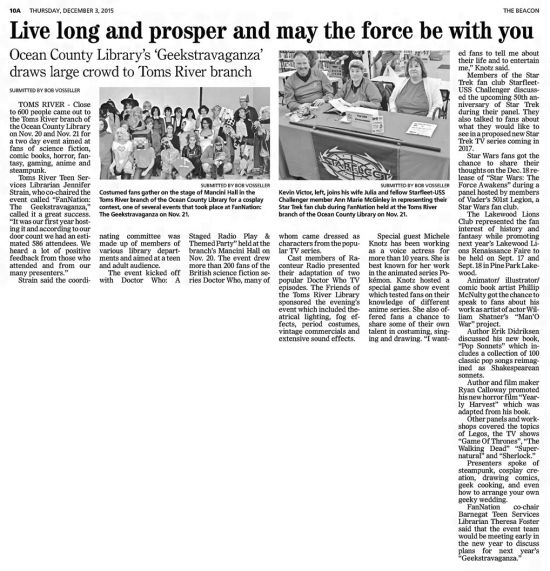 TOMS RIVER - Close to 600 people came out to the Toms River branch of the Ocean County Library on Nov. 20 and Nov. 21 for a two day event aimed at fans of science fiction, comic books, horror, fantasy, gaming, anime and steampunk.

Toms River Teen Services Librarian Jennifer Strain, who co-chaired the event called "FanNation: The Geekstravaganza," called it a great success. "It was our first year hosting it and according to our door count we had an estimated 586 attendees. We heard a lot of positive feedback from those who attended and from our many presenters."

Strain said the coordinating committee was made up of members of various library departments and aimed at a teen and adult audience.

The event kicked off with Doctor Who: A Staged Radio Play & Themed Party" held at the branch's Mancini Hall on Nov. 20. The event drew more than 200 fans of the British science fiction series Doctor Who, many of whom came dressed as characters from the popular TV series.

Special guest Michele Knotz has been working as a voice actress for more than 10 years. She is best known for her work in the animated series Pokemon. Knotz hosted a special game show event which tested fans on their knowledge of different anime series. She also offered fans a chance to share some of their own talent in costuming, singing and drawing. "I wanted fans to tell me about their life and to entertain me," Knotz said.

Members of the Star Trek fan club Starfleet-USS Challenger discussed the upcoming 50th anniversary of Star Trek during their panel. They also talked to fans about what they would like to see in a proposed new Star Trek TV series coming in 2017.

Star Wars fans got the chance to share their thoughts on the Dec. 18 release of "Star Wars: The Force Awakens" during a panel hosted by members of Vader's 501st Legion, a Star Wars fan club.

The Lakewood Lions Club represented the fan interest of history and fantasy while promoting next year's Lakewood Lions Renaissance Faire to be held on Sept. 17 and Sept. 18 in Pine Park Lakewood.

Animator/ illustrator/ comic book artist Phillip McNulty got the chance to speak to fans about his work as artist of actor William Shatner's "Man'0 War" project.

Author and film maker Ryan Calloway promoted his new horror film "Yearly Harvest" which was adapted from his book.

Other panels and workshops covered the topics of Legos, the TV shows "Game Of Thrones", "The Walking Dear "Supernatural' and "Sherlock."

Presenters spoke of steampunk, cosplay creation, drawing comics, geek cooking, and even how to arrange your own geeky wedding.

FanNation co-chair Barnegat Teen Services Librarian Theresa Foster said that the event team would be meeting early in the new year to discuss plans for next year's "Geekstravaganza."

Caption: Costumed fans gather on the stage of Mancini Hall in the Toms River branch of the Ocean County Library for a cosplay contest, one of several events that took place at FanNation: The Geekstravaganza on Nov. 21.