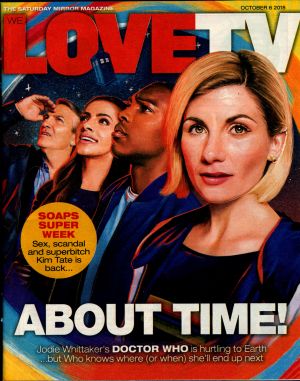 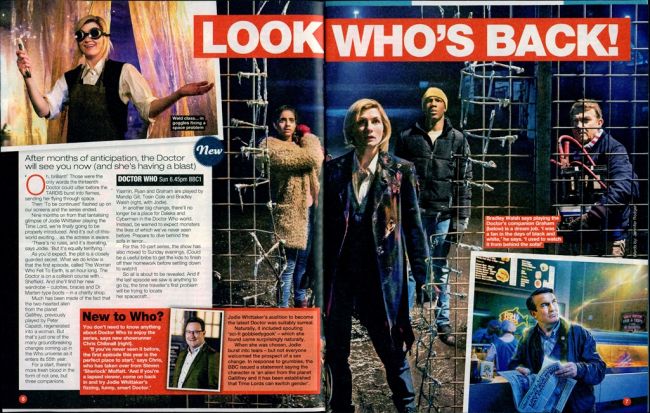 After months of anticipation, the Doctor will see you now (and she's having a blast)

'Oh, brilliant!' Those were the only words the thirteenth Doctor could utter before the TARDIS burst into flames, sending her flying through space.

Then 'To be continued' flashed up on our screens and the series ended.

Nine months on from that tantalising glimpse of Jodie Whittaker playing the Time Lord, we're finally going to be properly introduced. And it's out-of-this-world exciting... as the actress is aware.

'There's no rules, and it's liberating,' says Jodie. 'But it's equally terrifying.'

As you'd expect, the plot is a closely guarded secret. What we do know is that the first episode, called The Woman Who Fell To Earth, is an hour long. The Doctor is on a collision course with... Sheffield. And she'll find her new wardrobe - culottes, braces and Dr Marten-type boots - in a charity shop.

Much has been made of the fact that the two-hearted alien from the planet Gallifrey, previously played by Peter Capaldi, regenerated into a woman. But that's just one of the many groundbreaking changes coming up in the Who universe as it enters its 55th year.

For a start, there's more fresh blood in the form of not one, but three companions. Yasmin, Ryan and Graham are played by Mandip Gill, Tosin Cole and Bradley Walsh (right, with Jodie).

In another big change, there'll no longer be a place for Daleks and Cybermen in the Doctor Who world. Instead, be warned to expect monsters the likes of which we've never seen before. Prepare to dive behind the sofa in terror...

For this 10-part series, the show has also moved to Sunday evenings. (Could be a useful bribe to get the kids to finish off their homework before settling down to watch!)

So all is about to be revealed. And if the last episode we saw is anything to go by, the time traveller's first problem will be trying to locate her spacecraft...

Caption: Bradley Walsh says playing the Doctor's companion Graham (below) is a dream job. 'I was a fan in the days of black and white,' he says. 'I used to watch it from behind the sofa!'

You don't need to know anything about Doctor Who to enjoy the series, says new showrunner Chris Chibnall (right).

'If you've never seen it before, the first episode this year is the perfect place to start,' says Chris, who has taken over from Steven 'Sherlock' Moffatt. And if you're a lapsed viewer, come on back in and try Jodie Whittaker's fizzing, funny, smart Doctor.'

When she was chosen, Jodie burst into tears - but not everyone welcomed the prospect of a sex change. In response to grumbles, the BBC issued a statement saying the character is 'an alien from the planet Gallifrey and it has been established that Time Lords can switch gender'.