Look Who's back! (TV & Satellite Week) 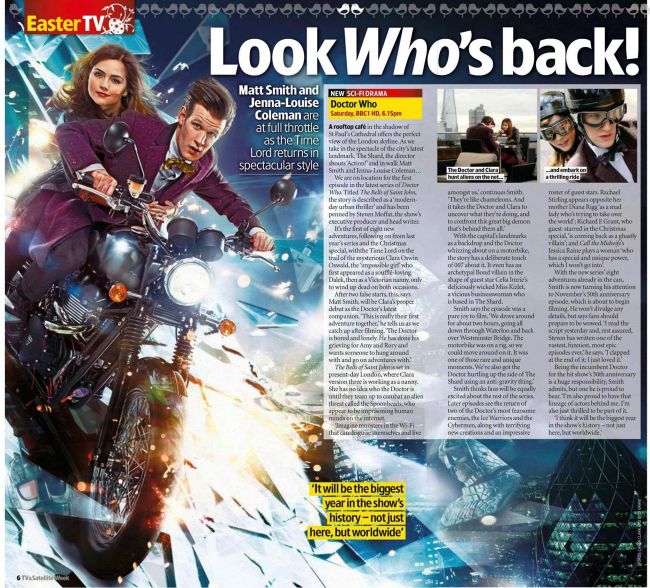 A rooftop café in the shadow of St Paul's Cathedral offers the perfect view of the London skyline. As we take in the spectacle of the city's latest landmark, The Shard, the director shouts 'Action!' and in walk Matt Smith and Jenna-Louise Coleman...

We are on location for the first episode in the latest series of Doctor Who. Titled The Bells of Saint John, the story is described as a 'modern-day urban thriller' and has been penned by Steven Moffat, the show's executive producer and head writer.

It's the first of eight new adventures, following on from last year's series and the Christmas special, with the Time Lord on the trail of the mysterious Clara Oswin Oswald, the 'impossible girl' who first appeared as a soufflé-loving Dalek, then as a Victorian nanny, only to wind up dead on both occasions.

After two false starts, this, says Matt Smith, will be Clara's proper debut as the Doctor's latest companion. 'This is really their first adventure together, he tells us as we catch up after filming. 'The Doctor is bored and lonely. He has done his grieving for Amy and Rory and wants someone to hang around with and go on adventures with.

The Bells of Saint John is set in present-day London, where Clara version three is working as a nanny. She has no idea who the Doctor is until they team up to combat an alien threat called the Spoonheads, who appear to be imprisoning human minds on the internet.

'Imagine monsters in the Wi-Fi that can disguise themselves and live amongst us; continues Smith. 'They're like chameleons. And it takes the Doctor and Clara to uncover what they're doing, and to confront this great big demon that's behind them all:

With the capital's landmarks as a backdrop and the Doctor whizzing about on a motorbike, the story has a deliberate touch of 007 about it. It even has an archetypal Bond villain in the shape of guest star Celia Imrie's deliciously wicked Miss Kizlet, a vicious businesswoman who is based in The Shard.

Smith says the episode was a pure joy to film. 'We drove around for about two hours, going all down through Waterloo and back over Westminster Bridge. The motorbike was on a rig, so we could move around on it. It was one of those rare and unique moments. We've also got the Doctor hurtling up the side of The Shard using an anti-gravity thing:

Smith thinks fans will be equally excited about the rest of the series. Later episodes see the return of two of the Doctor's most fearsome enemies, the Ice Warriors and the Cybermen, along with terrifying new creations and an impressive roster of guest stars. Rachael Stirling appears opposite her mother Diana Rigg 'as a mad lady who's trying to take over the world'; Richard E Grant, who guest-starred in the Christmas special, 'is coming back as a ghastly villain'; and Call the Midwife's Jessica Raine plays a woman 'who has a special and unique power, which I won't go into.

With the new series' eight adventures already in the can, Smith is now turning his attention to November's 50th anniversary episode, which is about to begin filming. He won't divulge any details, but says fans should prepare to be wowed. 'I read the script yesterday and, rest assured, Steven has written one of the vastest, funniest, most epic episodes ever, he says. 'I clapped at the end of it; I just loved it:

Being the incumbent Doctor for the hit show's 50th anniversary is a huge responsibility, Smith admits, but one he is proud to bear. 'I'm also proud to have that lineage of actors behind me. I'm also just thrilled to be part of it.

'I think it will be the biggest year in the show's history— not just here, but worldwide.

Caption: The Doctor and Clara hunt aliens on the net...

Caption: ...and embark on a thrilling ride