Looking 'Beyond Borders' For Next Doctor Who 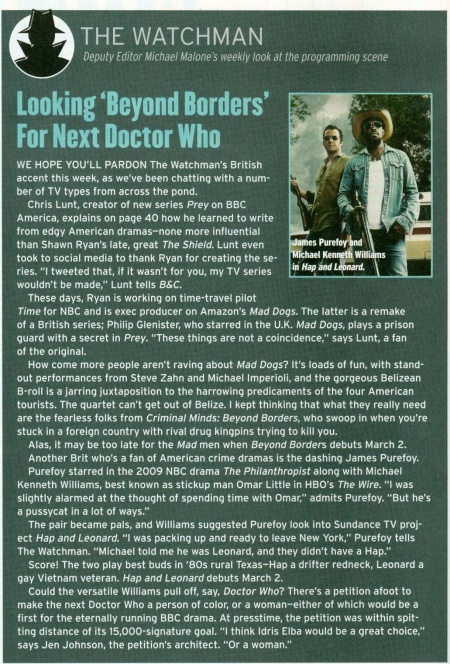 Looking 'Beyond Borders' For Next Doctor Who

WE HOPE YOU'LL PARDON The Watchman's British accent this week, as we've been chatting with a number of TV types from across the pond.

Chris Lunt, creator of new series Prey on BBC America, explains on page 40 how he learned to write from edgy American dramas—none more influential than Shawn Ryan's late, great The Shield. Lunt even took to social media to thank Ryan for creating the series. "I tweeted that, if it wasn't for you, my TV series wouldn't be made," Lunt tells B&C.

These days, Ryan is working on time-travel pilot Time for NBC and is exec producer on Amazon's Mad Dogs. The latter is a remake of a British series; Philip Glenister, who starred in the U.K. Mad Dogs, plays a prison guard with a secret in Prey. "These things are not a coincidence," says Lunt, a fan of the original.

How come more people aren't raving about Mad Dogs? It's loads of fun, with standout performances from Steve Zahn and Michael Imperioli, and the gorgeous Belizean B-roll is a jarring juxtaposition to the harrowing predicaments of the four American tourists. The quartet can't get out of Belize. I kept thinking that what they really need are the fearless folks from Criminal Minds: Beyond Borders, who swoop in when you're stuck in a foreign country with rival drug kingpins trying to kill you.

Alas, it may be too late for the Mad men when Beyond Borders debuts March 2.

Another Brit who's a fan of American crime dramas is the dashing James Purefoy.

Purefoy starred in the 2009 NBC drama The Philanthropist along with Michael Kenneth Williams, best known as stickup man Omar Little in HBO's The Wire. "I was slightly alarmed at the thought of spending time with Omar," admits Purefoy. "But he's a pussycat in a lot of ways."

The pair became pals, and Williams suggested Purefoy look into Sundance TV project Hap and Leonard. "I was packing up and ready to leave New York," Purefoy tells The Watchman. "Michael told me he was Leonard, and they didn't have a Hap."

Could the versatile Williams pull off, say, Doctor Who? There's a petition afoot to make the next Doctor Who a person of color, or a woman—either of which would be a first for the eternally running BBC drama. At presstime, the petition was within spitting distance of its 15,000-signature goal. "I think Idris Elba would be a great choice," says Jen Johnson, the petition's architect. "Or a woman."

Caption: James Purefoy and Kenneth Williams in Hap and Leonard.