Makes you proud to be an American couch potato 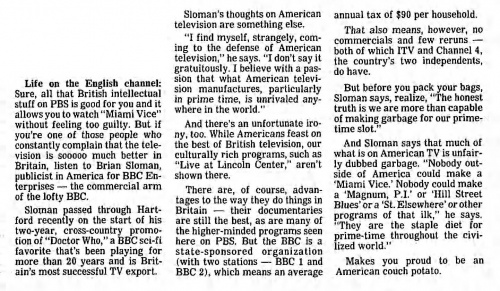 Life on the English channel: Sure, all that British intellectual stuff on PBS is good for you and it allows you to watch "Miami Vice" without feeling too guilty. But if you're one of those people who constantly complain that the television is sooooo much better in Britain, listen to Brian Sloman, publicist in America for BBC Enterprises — the commercial arm of the lofty BBC.

Simian passed through Hartford recently on the start of his two-year, cross-country promotion of "Doctor Who," a BBC sci-fi favorite that's been playing for more than 20 years and is Britain's most successful TV export.

Sloman's thoughts on American television are something else.

"I find myself, strangely, coming to the defense of American television," he says. "I don't say it gratuitously. I believe with a passion that what American television manufactures, particularly in prime time, is unrivaled anywhere in the world."

And there's an unfortunate irony, too. While Americans feast on the best of British television, our culturally rich programs, such as "Live at Lincoln Center," aren't shown there.

There are, of course, advantages to the way they do things in Britain — their documentaries are still the best, as are many of the higher-minded programs seen here on PBS. But the BBC is a state-sponsored organization (with two stations — BBC 1 and BBC 2), which means an average annual tax of $90 per household.

That also means, however, no commercials and few reruns — both of which ITV and Channel 4, the country's two independents, do have.

But before you pack your bags, Sloman says, realize, "The honest truth is we are more than capable of making garbage for our prime-time slot."

And Sloman says that much of what is on American TV is unfairly dubbed garbage. "Nobody outside of America could make a 'Miami Vice.' Nobody could make a 'Magnum, P.I.' or 'Hill Street Blues' or a 'St. Elsewhere' or other programs of that ilk," he says. "They are the staple diet for prime-time throughout the civilized world."

Makes you proud to be an American couch potato.