Mary Misses Out on Dr Who 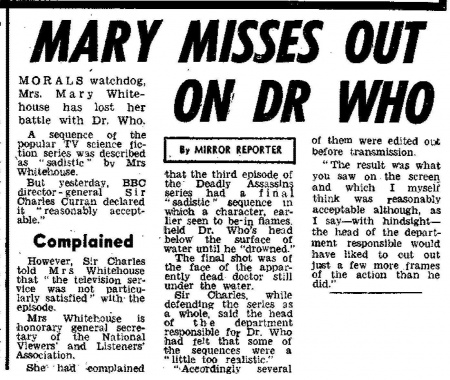 MORALS watchdog, Mrs. Mary Whitehouse has lost her battle with Dr, Who.

A sequence or the popular TV science fiction series was described as "sadistic" by Mrs Whitehouse.

However, Sir Charles told Mrs Whitehouse that "the television service was not particularly satisfied" with the episode.

Mrs Whitehouse is honorary general secretary of the National Viewers' and Listeners' Association.

She had complained that the third episode of the Deadly Assassin series had a final "sadistic" sequence in which a character, earlier seen to be in flames, held Dr. Who's head below the surface of water until he "drowned."

The final shot was of the face of the apparently dead doctor still under the water.

Sir Charles, while defending the series as a whole, said the head of the department responsible for Dr. Who had felt that some of the sequences were a "little too realistic."

"Accordingly several of them were edited out before transmission.

"The result was what you saw on the screen and which I myself think was reasonably acceptable although, as I say—with hindsight—the head of the department responsible would have liked to cut out just a few more frames of the action than he did."