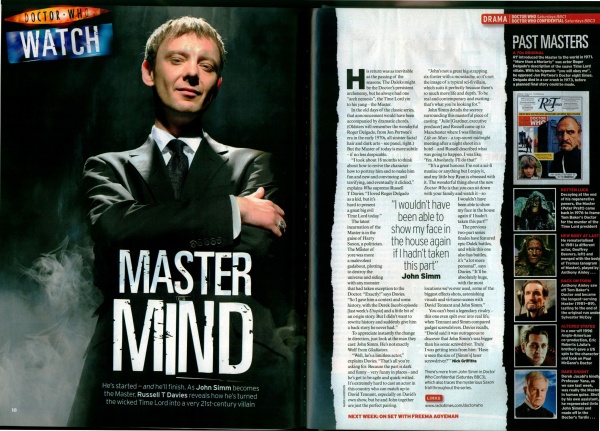 His return was as inevitable as the passing of the seasons. The Daleks might be the Doctor's persistent archenemy, but he always had one "arch nemesis", the Time Lord yin to his yang — the Master.

In the old days of the classic series, that announcement would have been accompanied by dramatic chords. (Oldsters will remember the wonderful Roger Delgado, from Jon Pertwee's era in the early 1970s, all sinister facial hair and dark arts — see panel, right.) But the Master of today is more subtle — if no less despicable.

"I took about 18 months to think about how to revive the character — how to portray him and to make him fun and new and convincing and terrifying, and eventually it clicked," explains Who supremo Russell T Davies "I loved Roger Delgado as a kid, but it's hard to present a great big evil Time Lord today."

The latest incarnation of the Master is in the guise of Harry Saxon, a politician. The Master of yore was more a malevolent gadabout, plotting to destroy the universe and siding with any monster that had taken exception to the Doctor. "Exactly!" says Davies. "So I gave him a context and some history, with the Derek Jacobi episode [last week's Utopia] and a little bit of an origin story. But I didn't want to rewrite history and suddenly give him a back story he never had."

To appreciate instantly the change in direction, just look at the man they cast: John Simm. He's not exactly Wolf from Gladiators.

"Well, he's a limitless actor," explains Davies. "That's all you're asking for. Because the part is dark and funny — very funny in places — and he's got to be agile and quick-witted. It's extremely hard to cast an actor in this country who can match up to á David Tennant, especially on David's g own show, but he and John together m are just the perfect pairing.

"John's not a great big strapping six-footer with a moustache, so it's not the image of a typical sci-fi villain, which suits it perfectly because there's so much more life and depth. To be real and contemporary and exciting — that's what you're looking for."

John Simm details the secrecy surrounding this masterful piece of casting: "Julie [Gardner, executive producer] and Russell came up to Manchester where I was filming Life on Mars— a top-secret midnight meeting after a night shoot in a hotel — and Russell described what was going to happen. I was like, 'Yea Absolutely. I'll do that!'

"It's a great honour. I'm not a sci-fi maniac or anything but I enjoy it, and my little boy Ryan is obsessed with it. The wonderful thing about the new Doctor Who is that you can sit down with your family and watch it — so I wouldn't have been able to show my face in the house again if I hadn't taken this part!"

The previous two-part series finales have featured epic Dalek battles, and while this one also has battles, it's "a lot more personal", says Davies. "It'll be absolutely huge, with the most locations we've ever used, some of the biggest effects shots, astonishing visuals and virtuoso scenes with David Tennant and John Simm."

You can't beat a legendary rivalry — this one even spilt over into real life, when Tennant and Simm compared gadget screwdrivers. Davies recalls, "David said it was outrageous to discover that John Simm's was bigger than his sonic screwdriver. Truly. I was getting texts from him: 'Have u seen the size of [Simm's] laser screwdriver?" Nick Griffiths

There's more from John Simm in Doctor Who Confidential (Saturday BBC3), which also traces the mysterious Saxon trail throughout the series.

RT introduced the Master to the world in 1971. "More than a Moriarty" was actor Roger Delgado's description of the suave Time Lord villain. With his hypnotic "you will obey me", he opposed Jon Pertwee's Doctor eight times. Delgado died in a car crash in 1973, before a planned final story could be made.

ROTTEN LUCK Decaying at the end of his regenerative powers, the Master (Peter Pratt) came back in 1976 to frame Tom Baker's Doctor for the murder of the Time Lord president

He rematerialised in 1981(a different actor, Geoffrey Beevers, left) and merged with the bod of Tremas (anagram of Master), played by Anthony Ainley ...

Anthony Ainley saw off Tom Baker's Doctor and became the longest-serving Master (1981-89), lasting to the end of the original run under Sylvester McCoy

In a one-off 1996 Anglo-American co-production, Eric Roberts (Julia's brother) gave a US spin to the character and took on Paul McGann's Doctor

Derek Jacobi's kindly Professor Yana, as we saw last week, was really the Master in human guise. Shot by his own assistant, he regenerated (into John Simm) and made off in the Doctor's Tardis .. .

NEXT WEEK: ON SET WITH FREEMA AGYEMAN