Difference between revisions of "Master of mayhem" 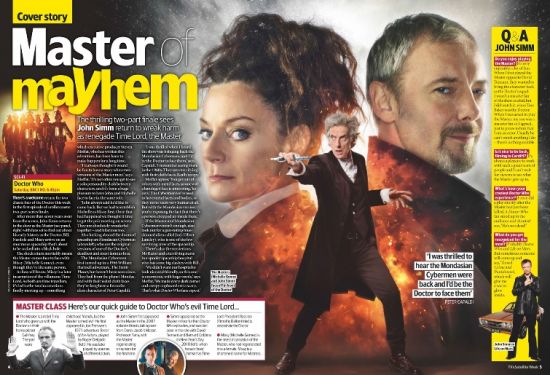 There's a welcome return for two classic foes of the Doctor this week in the first episode of a rollercoaster two-part series finale.

After more than seven years away from the screen, John Simm returns to the show as the Master (see panel, right) with fans set to find out about his early history as the Doctor, Bill, Nardole and Missy arrive on an enormous spaceship that's about to be sucked into a black hole.

The shock return inevitably means the Master comes face to face with Missy (Michelle Gomez), even though they're the same person.

As fans will know, Missy is a later incarnation of the villainous Time Lord. As both are time travellers, it's led to the two incarnations finally meeting up — something which executive producer Steven Moffat, who has written this adventure, has been keen to make happen for a long time.

'I'd always thought it would be fun to have a story where two versions of the Master meet; says Moffat. It's not often you get to see a solo personality clash between characters, and it's been a huge pleasure to have John and Michelle face to face in the same role.

'John always said he'd like to come back. But we had to establish Michelle as Missy first. Once that had happened we thought it time to get the pair meeting on screen. They are absolutely wonderful together — and hilarious too:

Also lurking aboard the doomed spaceship are Mondasian Cybermen (above left),who are the original versions of one of the Doctor's deadliest and most famous foes.

The Mondasian Cybermen first turned up in a 1966 William Hartnell adventure, The Tenth Planet, but haven't been seen since. They hail from the planet Mondas, and with their weird cloth faces they've long been a favourite alien character of Peter Capaldi.

"I was thrilled when I heard the show was bringing back the Mondasian Cybermen, and I'd be the Doctor to face them; says Capaldi. remember seeing the in the 1960s. They were terrifying with their cloth faces. Really creepy.'

Moffat agrees: 'You get lots of robots with metal faces, so one with a bandaged face is interesting,' he says.' The Cybermen we're used to have metal faces and bodies, so they never seem very human at all. But with the Mondasian version you're exposing the fact that there's a person chopped up inside there.'

If the Master and Mondasian Cybermen weren't enough, also look out for a gun-toting blue-skinned alien called Jorj (Oliver Lansley),who is one of the few surviving crew of the spaceship.

There's also the mysterious Mr Razor and a terrifying nurse in a spooky spaceship hospital who has some big clashes with Bill.

'We didn't want our hospital to look nice and friendly, so this one is enormous, with huge wards; says Moffat. We made every dark corner and creepy cupboard extra scary. That's what Doctor Who fans expect.'

Here's our quick guide to Doctor Who's evil Time Lord...

The Master is a rebel Time Lord who grew up with the Doctor on their home planet Gallifrey. The pair were childhood friends, but the Master turned evil. He first appeared in Jon Pertwee's 1971 adventure Terror of the Autons, played by Roger Delgado (left). He was later played by a series of different actors.

John Simm first appeared as the Master in the 2007 episode Utopia, taking over from Derek Jacobi's Master, Professor Yana, with the Master regenerating on screen for the first time.

Simm appeared as the Master in four further Doctor Who episodes, and was last seen in the role with David Tennant and Bernard Cribbins on New Year's Day 2010 (left), when he sacrificed himself as Time Lord President Rassilon (Timothy Dalton) tried to assassinate the Doctor.

Missy (Michelle Gomez) is the latest incarnation of the Master, who had regenerated into a female. Missy is a shortened name for Mistress.

Caption: The Masters (Michelle Gomez and John Simm) face off in front of the Doctor

Do you enjoy playing the Master?

It's very enjoyable, a lot of fun. When I first played the Master opposite David Tennant, they wanted to bring the character back as the Doctor's equal. I wasn't a massive fan of the show as a kid, but I did watch it, when Tom Baker was the Doctor. When I was asked to play the Master, my son was a massive fan so I agreed, just to prove to him that I am an actor. Usually he can't watch anything I do — there's nothing suitable.

Is it nice to be back filming in Cardiff?

It's always a pleasure to work with such a great team of people and I can't wait for viewers to see what the Master gets up to.

What's been your craziest Doctor Who experience?

I once did a play shortly after the Master had just been killed. A Doctor Who fan stood up in the audience and shouted out, 'He's not dead!'

What do you get recognised for the most?

Probably Doctor Who and Life on Mars. But sometimes someone will come up and say, loved Crime and Punishment, which will give me a warm glow inside.