Meet The Dr. Who Fan Club 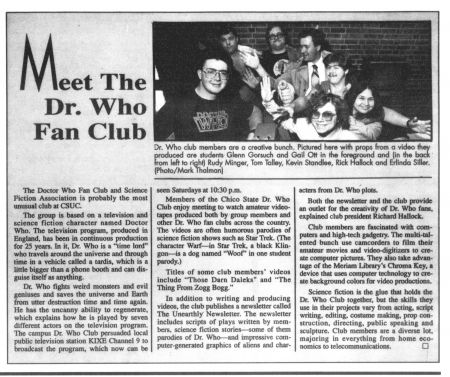 The Doctor Who Fan Club and Science Fiction Association is probably the most unusual club at CSUC.

The group is based on a television and science fiction character named Doctor Who, The television program, produced in England, has been in continuous production for 25 years. In it, Dr. Who is a "time lord" who travels around the universe and through time in a vehicle called a tardis, which is a little bigger than a phone booth and can disguise itself as anything.

Dr. Who fights weird monsters and evil geniuses and saves the universe and Earth from utter destruction time and time again. He has the uncanny ability to regenerate, which explains how he is played by seven different actors on the television program, The campus Dr. Who Club persuaded local public television station KIXE Channel 9 to broadcast the program, which now can be seen Saturdays at 10:30 p.m.

Members of the Chico State Dr. Who Club enjoy meeting to watch amateur videotapes produced both by group members and other Dr. Who fan clubs across the country. The videos are often humorous parodies of science fiction shows such as Star Trek. (The character Warf--in Star Trek, a black Klingon--is a dog named "Woof' in one student parody.)

Titles of some club members' videos include "Those Darn Daleks" and "The Thing From Zogg Bogg."

In addition to writing and producing videos, the club publishes a newsletter called The Unearthly Newsletter. The newsletter includes scripts of plays written by members, science fiction stories—some of them parodies of Dr. Who—and impressive computer-generated graphics of aliens and characters from Dr. Who plots.

Both the newsletter and the club provide an outlet for the creativity of Dr. Who fans, explained club president Richard Hallock.

Club members are fascinated with computers and high-tech gadgetry. The multi-talented bunch use camcorders to film their amateur movies and video-digitizers to create computer pictures. They also take advantage of the Meriam Library's Chroma Key, a device that uses computer technology to create background colors for video productions.

Science fiction is the glue that holds the Dr. Who Club together, but the skills they use in their projects vary from acting, script writing, editing, costume making, prop construction, directing, public speaking and sculpture. Club members are a diverse lot, majoring in everything from home economics to telecommunications.

Caption: Dr. Who club members are a creative bunch. Pictured here with props from a video they produced are students Glenn Gorsuch and Gail Ott in the foreground and (in the back from left to right) Rudy Minger, Tom Talley, Kevin Standlee, Rick Haflock and Erlinda Siller.