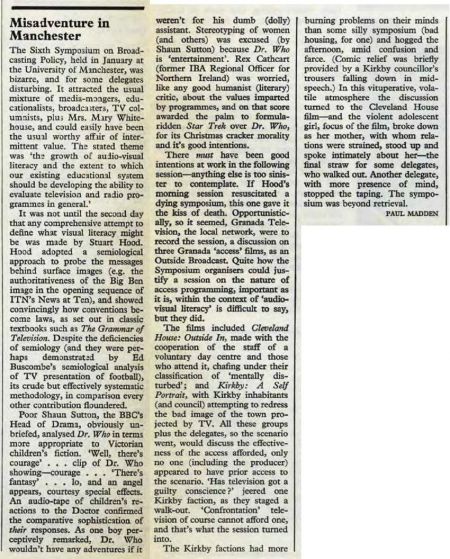 The Sixth Symposium on Broadcasting Policy, held in January at the University of Manchester, was bizarre, and for some delegates disturbing. It attracted the usual mixture of media-mongers, educationalists, broadcasters, TV columnists, plus Mrs. Mary Whitehouse, and could easily have been the USDA worthy affair of intermittent value. The stated theme was 'the growth of audio-visual literacy and the extent to which our existing educational system should be developing the ability to evaluate television and radio programmes in general.'

It was not until the second day that any comprehensive attempt to define what visual literacy might be was made by Stuart Hood. Hood adopted a semiological approach to probe the messages behind surface images (e.g. the authoritativeness of the Big Ben image in the opening sequence of ITN's News at Ten), and showed convincingly how conventions become laws, as set out in classic textbooks such as The Grammar of Television. Despite the deficiencies of semiology (and they were perhaps demonstrated by Ed Buscombe's semiological analysis of TV presentation of football), its crude but effectively systematic methodology, in comparison every other contribution floundered.

Poor Shaun Sutton, the BBC's Head of Drama, obviously un-briefed, analysed Dr. Who in terms more appropriate to Victorian children's fiction. 'Well, there's courage' ... clip of Dr. Who showing—courage ... 'There's fantasy' ... lo, and an angel appears, courtesy special effects. An audio-tape of children's reactions to the Doctor confirmed the comparative sophistication of their responses. As one boy perceptively remarked, Dr. Who wouldn't have any adventures if it weren't for his dumb (dolly) assistant. Stereotyping of women (and others) was excused (by Shaun Sutton) because Dr. Who is 'entertainment'. Rex Cathcart (former IBA Regional Officer for Northern Ireland) was worried, like any good humanist (literary) critic, about the values imparted by programmes, and on that score awarded the palm to formula-ridden Star Trek over Dr. Who, for its Christmas cracker morality and it's good intentions.

There must have been good intentions at work in the following session—anything else is too sinister to contemplate. If Hood's morning session resuscitated a dying symposium, this one gave it the kiss of death. Opportunistically, so it seemed, Granada Television, the local network, were to record the session, a discussion on three Granada 'access' films, as an Outside Broadcast. Quite how the Symposium organisers could justify a session on the nature of access programming, important as it is, within the context of 'audiovisual literacy' is difficult to say, but they did.

The films included Cleveland House: Outside In, made with the cooperation of the staff of a voluntary day centre and those who attend it, chafing under their classification of 'mentally disturbed'; and Kirkby: A Self Portrait, with Kirkby inhabitants (and council) attempting to redress the bad image of the town projected by TV. All these groups plus the delegates, so the scenario went, would discuss the effectiveness of the access afforded, only no one (including the producer) appeared to have prior access to the scenario. 'Has television got a guilty conscience ?' jeered one Kirkby faction, as they staged a walk-out. 'Confrontation' television of course cannot afford one, and that's what the session turned into.

The Kirkby factions had more burning problems on their minds than some silly symposium (bad housing, for one) and hogged the afternoon, amid confusion and farce. (Comic relief was briefly provided by a Kirkby councillor's trousers falling down in mid-speech.) In this vituperative, volatile atmosphere the discussion named to the Cleveland House film—and the violent adolescent girl, focus of the film, broke down as her mother, with whom relations were strained, stood up and spoke intimately about her—the final straw for some delegates, who walked out. Another delegate, with more presence of mind, stopped the taping. The symposium was beyond retrieval.