More adventure ahead for the girl who made the Cyberman 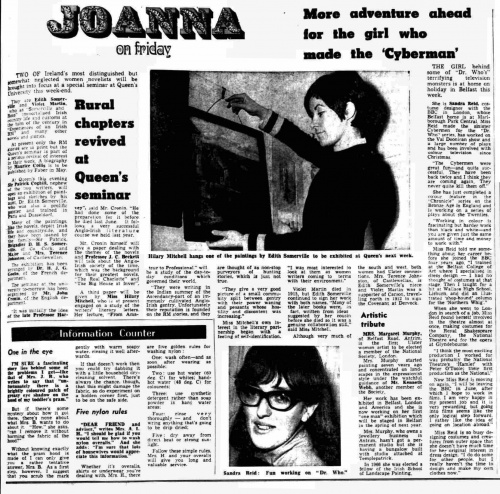 THE GIRL behind some of "Dr. Who's" terrifying television monsters is at home on holiday in Belfast this week.

She is Sandra Reid, costume designer with the BBC in London. whose Belfast home is at Marlborough Park Central. Miss Reid made the sinister Cybermen for the "Dr. Who" series, has worked on the Val Doonican show and a large number of plays and has been involved with colour television since Christmas.

"The Cybermen were great fun—and quite successful. They have been back twice and I think they are coming again. They never quite kill them off."

She has just completed a colour feature in the "Chronicle" series on the Bronze Age in England and is working on a series of plays about the Twenties.

"Working in colour is fascinating but harder work than black and white—and you are given just the same amount of time and money to work with."

Miss Reid told me something about her career before she joined the BBC four years ago. "I trained at the Belfast College of Art where I specialised in dress design I had no thought of costumes at that stage. Then I taught for a hit at Wallace High School, Lisburn. and did an illustrated 'shop-hound' column for the 'Northern Whig'."

When she went to London in search of a job, Miss Reid found herself involved in the theatre almost at once, making costumes for the Royal Shakespeare Company, the National Theatre and for the opera at Glyndebourne.

"I think the most exciting production I worked for was probably the National Theatre's 'Hamlet' with Peter O'Toole; their first production as the National."

Now Miss Reid is moving on again. "I will be leaving the BBC in June, after which I hope to work in films. I am very happy in my present job and it is very rewarding, but going into films seems like the only logical step forward. I rather like the idea of going on location abroad."

Miss Reid is so busy designing costumes and creatures from outer space that she doesn't have much time for her original interest in dress design. "I do do some for other people, but I really haven't the time to design and make my own clothes now."