More outrage as Dr Who 'crucified' 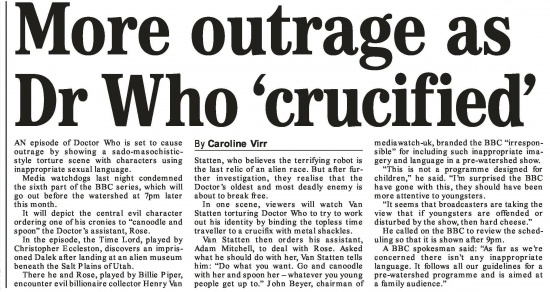 AN episode of Doctor Who is set to cause outrage by showing a sado-masochistic-style torture scene with characters using inappropriate sexual language.

Media watchdogs last night condemned the sixth part of the BBC series, which will go out before the watershed at 7pm later this month.

It will depict the central evil character ordering one of his cronies to "canoodle and spoon" the Doctor's assistant, Rose.

In the episode, the Time Lord, played by Christopher Eccleston, discovers an imprisoned Dalek after landing at an alien museum beneath the Salt Plains of Utah.

There he and Rose, played by Billie Piper, encounter evil billionaire collector Henry Van Statten, who believes the terrifying robot is the last relic of an alien race. But after further investigation, they realise that the Doctor's oldest and most deadly enemy is about to break free.

In one scene, viewers will watch Van Statten torturing Doctor Who to try to work out his identity by binding the topless time traveller to a crucifix with metal shackles.

Van Statten then orders his assistant, Adam Mitchell, to deal with Rose. Asked what he should do with her, Van Statten tells him: "Do what you want. Go and canoodle with her and spoon her —whatever you young people get up to." John Beyer, chairman of mediawatch-uk, branded the BBC "irresponsible" for including such inappropriate imagery and language in a pre-watershed show.

"This is not a programme designed for children," he said. "I'm surprised the BBC have gone with this, they should have been more attentive to youngsters.

"It seems that broadcasters are taking the view that if youngsters are offended or disturbed by the show, then hard cheese."

He called on the BBC to review the scheduling so that it is shown after 9pm.

A BBC spokesman said: "As far as we're concerned there isn't any inappropriate language. It follows all our guidelines for a pre-watershed programme and is aimed at a family audience."