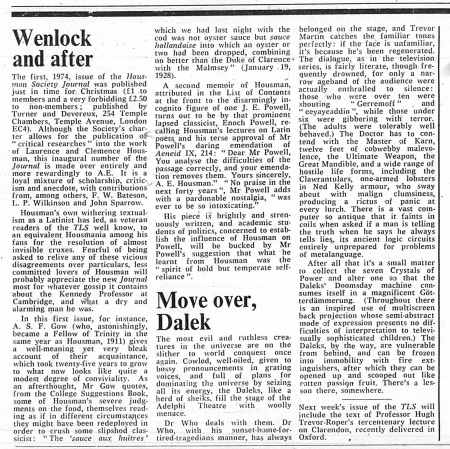 The most evil and ruthless creatures in the universe are on the slither to world conquest once again. Cowled, well-oiled, given to bossy pronouncements in grating voices, and full of plans for dominating the universe by seizing all its energy, the Daleks, like a herd of sheiks, fill the stage of the Adelphi Theatre with woolly menace.

Dr Who deals with them. Dr Who, with his sunset-home-for tired-tragedians manner, has always belonged on the stage, and Trevor Martin catches the familiar tones perfectly: if the face is unfamiliar, it's because he's been regenerated. The dialogue, as in the television series, is fairly literate, though frequently drowned, for only a narrow ageband of the audience were actually enthralled to silence: those who were over ten were shouting "Gerremoff" and "eeyayeaddio", while those under six were gibbering with terror. (The adults were tolerably well behaved.) The Doctor has to contend with the Master of Karn, twelve feet of cobwebby malevolence, the Ultimate Weapon, the Great Mandible, and a wide range of hostile life forms, including the Clawrantulars, one-armed lobsters in Ned Kelly armour, who sway about with malign clumsiness, producing a rictus -of panic at every lurch. There is a vast computer so antique that it faints in coils when asked if a man is telling the truth when he says he always tells lies, its ancient logic circuits entirely unprepared for problems of metalanguage.

After all that it's a small matter to collect the seven Crystals of Power and alter one so that the Daleks' Doomsday machine consumes itself in a magnificent Götterdämmerung. (Throughout there is an inspired use of multiscreen back projection whose semi-abstract mode of expression presents no difficulties of interpretation to televisually sophisticated children.) The Daleks, by the way, are vulnerable from behind, and can be frozen into immobility with fire extinguishers, after which they can be opened tip and scooped out like rotten passion fruit. There's a lesson there, somewhere.