Mr Music of the small screen 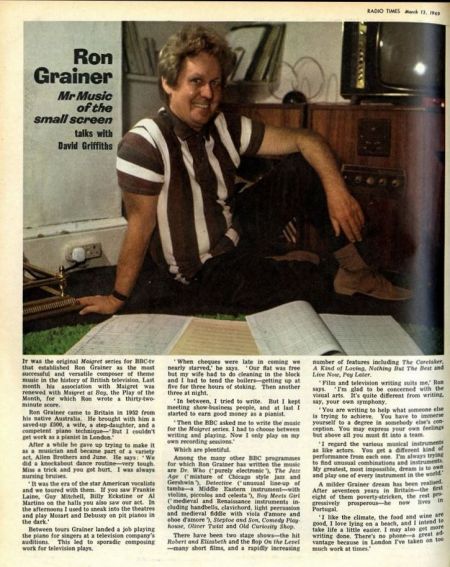 It was the original Maigret series for BBC-tv that established Ron Grainer as the most successful and versatile composer of theme music in the history of British television. Last month his association with Ma0069gret was renewed with Halve: at Bay, the Play of the Month, for which Ron wrote a thirty-two minute score.

Ron Grainer came to Britain in 1952 from his native Australia. He brought with him a saved-up £500, a wife, a stepdaughter, and a competent piano technique—'But I couldn't get work as a pianist in London.'

After a while he gave up trying to make it as a musician and became part of a variety act. Allen Brothers and June. He says. We did a knockabout dance routine—very tough. Miss a trick and you got hurt I was always nursing bruises

'It was the era of the star American vocalists and we toured with them. If you saw Frankie Lathe, Guy Mitchell. Billy Eckstine or Al Martino on the halls you also saw our act. In the afternoons I used to sneak into the theatres and play Mozart and Debussy on pit pianos in the dark.'

Between tours Grainer landed a job playing the piano for singers at a television company's auditions. This led to sporadic composing work for television plays.

When cheques were late in coming we nearly starved; he says. 'Our flat was free but my wife had to do cleaning in the block and I had to tend the boilers—getting up at five for three hours of stoking. Then another three at night.

'In between. I tried to write. But I kept meeting show business People, and at last I started to earn good money as a pianist.

'Then the BBC asked me to write the music for the Maigret series, I had to choose between writing and playing, Now I only play on my own recording sessions'

Among the many other BBC programmes for which Ron Grainer has written the music are Dr. Who ('purely electronic'), The Jazz Age (mixture of Chicago style jazz and Gershwin), Detective ('unusual line-up of samba—a Middle Eastern instrument—with violins, piccolos and celesta), Boy Meets Girl ('medieval and Renaissance instruments including handbells, clavichord, light percussion and medieval fiddle with viola d'amore and oboe d'amore'), Steptoe and Son, Comedy Playhouse, Oliver Twist and Old Curiosity Shop.

There have been two stage shows—the hit Robert and Elizabeth and the flop On the Level—many short films, and a rapidly increasing number of features including The Caretaker, A Kind of Loving, Nothing But The Best and Live Now, Pay Later,

'Film and television writing suits me,' Ron says. 'I'm glad to be concerned with the visual arts. It's quite different from writing, say, your own symphony.

'You are writing to help what someone else is trying to achieve. You have to immerse yourself to a degree in somebody else's conception. You may express your own feelings but above all you must fit into a learn.

'I regard the various musical instruments as like actors. You get a different kind of

performance from each one. I'm always trying to find unusual combinations and instruments. My greatest, most impossible, dream is to own and play one of every instrument in the world.'

A milder Grainer dream has been realised. After seventeen years in Britain—the first eight of them poverty-stricken, the rest progressively prosperous—he now lives in Portugal.

'I like the climate, the food and wine are good, I love lying on the beach, and I intend to take life a little easier. I may also get more writing done. There's no phone-a great advantage because in London I've taken on too much work at times.