My Top 5 Doctor Who Companions 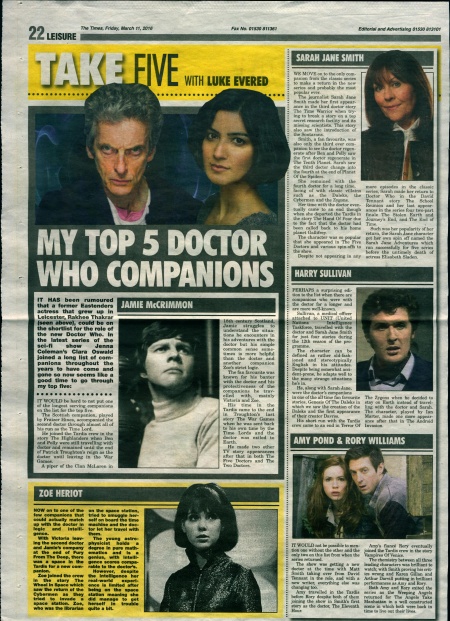 IT HAS been rumoured that a former Eastenders actress that grew up in Leicester, Rakhee Thakrar (seen above), could be on the shortlist for the role of the new Doctor Who. In the latest series of the sci-fi show Jenna Coleman's Clara Oswald joined a long list of companions throughout the years to have come and gone so now seems like a good time to go through my top five:

IT-WOULD be hard to not put one of the longest serving companions on the list for the top five.

The Scottish companion, played by Fraizer Hines, accompanied the second doctor through almost all of his run as the Time Lord.

He joined the Tardis crew in the story The Highlanders when Ben and Polly were still travelling with doctor and remained until the end of Patrick Troughton's reign as the doctor until leaving in the War Games.

A piper of the Clan McLaren in 18th century Scotland, Jamie struggles to understand the situations he encounters in his adventures with the doctor but his simple common sense sometimes is more helpful than the doctor and another companion Zoe's strict logic.

The fan favourite was known for his banter with the doctor and his protectiveness of the companions he travelled with, mainly Victoria and Zoe.

His time in the Tardis came to the end in Troughton's last story The War Games when he was sent back to his own time by the Time Lords and the doctor was exiled to Earth.

He made two other TV story appearances after that in both The Five Doctors and The Two Doctors.

NOW on to one of the few companions that could actually match up with the doctor in logic and intelligence.

With Victoria leaving the second doctor and Jamie's company at the end of Fury From The Deep, there was a space in the Tardis for a new companion.

Zoe joined the crew in the story The Wheel In Space which saw the return of the Cybermen as they tried to invade a space station. Zoe, who was the librarian on the space station, tried to smuggle herself on board the time machine and the doctor let her travel with them.

The young astrophysicist holds a degree in pure mathematics and is a genius, with intelligence scores comparable to the doctor's.

However, despite the intelligence her real-world experience is limited after being on the space station meaning she did manage to get herself in trouble quite a bit.

WE MOVE on to the only companion from the classic series to make a return in the new series and probably the most popular ever.

The journalist Sarah Jane Smith made her first appearance in the third doctor story The Time Warrior when trying to break a story on a top secret research facility and its missing scientists. This story also saw the introduction of the Sontarans.

Smith, a fan favourite, was also only the third ever companion to see the doctor regenerate after Ben and Polly saw the first doctor regenerate in The Tenth Planet. Sarah saw the third doctor change into the fourth at the end of Planet Of the Spiders.

She remained with the fourth doctor for a long time, facing of with classic villains such as the Daleks, the Cybermen and the Zygons.

Her time with the doctor eventually came to an end though when she departed the Tardis in the story The Hand Of Fear due to the fact that the doctor had been called back to his home planet Gallifrey.

The character was so popular that she appeared in The Five Doctors and various spin-offs to the show.

Despite not appearing in any more episodes in the classic series, Sarah made her return to Doctor Who in the David Tennant story The School Reunion and her last appearances in the series four two-part finale The Stolen Earth and Journey's End, and The End of Time.

Such was her popularity of her return, the Sarah Jane character got her own spin off named the Sarah Jane Adventures which ran successfully for five series before the untimely death of actress Elisabeth Sladen.

PERHAPS a surprising edition to the list when there are companions who were with the doctor for a longer and are more well-known.

Sullivan, a medical officer attached to UNIT (United Nations Intelligence Taskforce, travelled with the doctor and Sarah Jane Smith for just four stories during the 12th season of the programme.

The character can be defined as rather old-fashioned and stereotypically English in his attitudes. Despite being somewhat accident-prone, he adapts well to the many strange situations he's in.

He, along with Sarah Jane, were the doctor's companions in one of the all time fan favourite stories, Genesis Of The Daleks in which we saw the creation of the Daleks and the first appearance of their creator Davros.

His short run with the Tardis crew came to an end in Terror Of The Zygons when he decided to stay on Earth instead of travelling with the doctor and Sarah. The character, played by Ian Marter, made one more appearance after that in The Android Invasion.

IT WOULD not be possible to mention one without the other and the only two on this list from when the series returned.

The show was getting a new doctor at the time with Matt Smith taking over from David Tennant in the role, and with a new writer, everything else was changing too.

Amy travelled in the Tardis before Rory despite both of them joining the show in Smith's first story as the doctor, The Eleventh Hour.

The chemistry between all three leading characters was brilliant to watch; with Smith proving his critics wrong and Karen Gillan and Arthur Darvill putting in brilliant performances as Amy and Rory.

Both Amy and Rory exited the series as the Weeping Angels returned for The Angels Take Manhattan in a well constructed scene in which both were back in time to live out their lives.