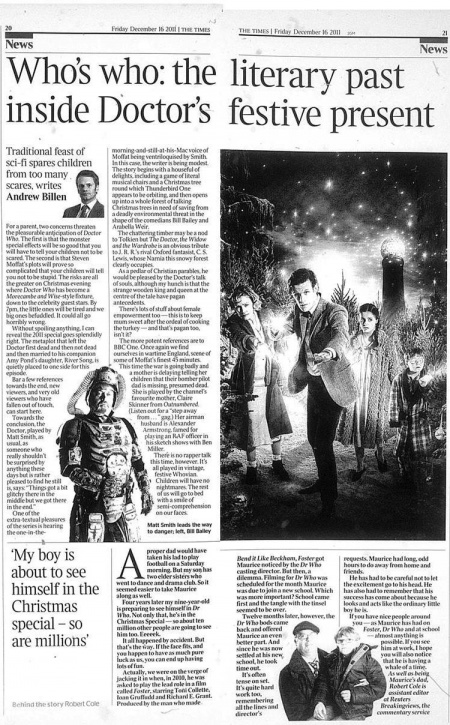 A proper dad would have taken his lad to play football on a Saturday morning. But my son has two elder sisters who went to dance and drama club. So it seemed easier to take Maurice along as well.

Four years later my nine-year-old is preparing to see himself in Dr Who. Not only that, he's in the Christmas Special - so about ten million other people are going to see him too. Eeeeek.

It all happened by accident. But that's the way. If the face fits, and you happen to have as much pure luck as us, you can end up having lots of fun.

Actually, we were on the verge of jacking it in when, in 2010, he was asked to play the lead role in a film called Foster, starring Toni Collette, Ioan Gruffudd and Richard E. Grant. Produced by the man who made Bend it Like Beckham, Foster got Maurice noticed by the Dr Who casting director. But then, a dilemma. Filming for Dr Who was scheduled for the month Maurice was due to join a new school. Which was more important? School came first and the tangle with the tinsel seemed to be over.

Twelve months later, however, the Dr Who bods came back and offered Maurice an even better part. And since he was now settled at his new school, he took time out.

It's often tense on set. It's quite hard work too, remembering all the lines and director's requests. Maurice had long, odd hours to do away from home and friends.

He has had to be careful not to let the excitement go to his head. He has also had to remember that his success has come about because he looks and acts like the ordinary little boy he is.

If you have nice people around you - as Maurice has had on Foster, Dr Who and at school - almost anything is possible. If you see him at work, I hope you will also notice that he is having a whale of a time.

As well as being Maurice's dad, Robert Cole is assistant editor at Reuters Breakingviews, the commentary service