My sweet Time Lord: Are Sixties Daleks worth anything? 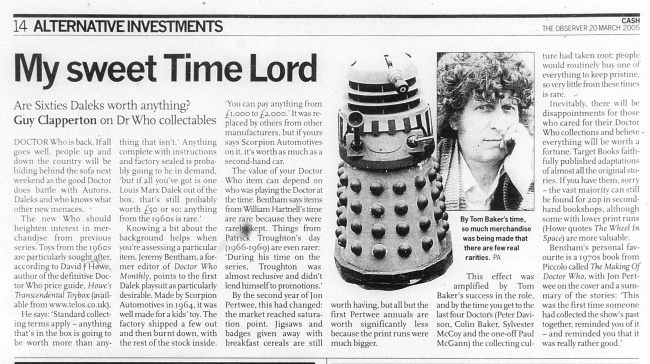 DOCTOR Who is back. If all goes well, people up and down the country will be hiding behind the sofa next weekend as the good Doctor does battle with Autons, Daleks and who knows what other new menaces.

The new Who should heighten interest in merchandise from previous series. Toys from the 1960s are particularly sought after, according to David J Howe, author of the definitive Doctor Who price guide, Howe's Transcendental Toybox (available from www.telos.co.uk).

He says: 'Standard collecting terms apply - anything that's in the box is going to be worth more than any thing that isn't.' Anything complete with instructions and factory sealed is probably going to be in demand, 'but if all you've got is one Louis Marx Dalek out of the box, that's still probably worth £50 or so: anything from the 1960s is rare.'

Knowing a bit about the background helps when you're assessing a particular item. Jeremy Bentham, a former editor of Doctor Who Monthly , points to the first Dalek playsuit as particularly desirable. Made by Scorpion Automotives in 1964, it was well made for a kids' toy. The factory shipped a few out and then burnt down, with the rest of the stock inside. 'You can pay anything from £1,000 to £2,000.' It was replaced by others from other manufacturers, but if yours says Scorpion Automotives on it, it's worth as much as a second-hand car.

The value of your Doctor Who item can depend on who was playing the Doctor at the time. Bentham says items from William Hartnell's time are rare because they were rarely kept. Things from Patrick Troughton's day (1966-1969) are even rarer: 'During his time on the series, Troughton was almost reclusive and didn't lend himself to promotions.'

By the second year of Jon Pertwee, this had changed: the market reached saturation point. Jigsaws and badges given away with breakfast cereals are still worth having, but all but the first Pertwee annuals are worth significantly less because the print runs were much bigger.

This effect was amplified by Tom Baker's success in the role, and by the time you get to the last four Doctors (Peter Davison, Colin Baker, Sylvester McCoy and the one-off Paul McGann) the collecting cul ture had taken root: people would routinely buy one of everything to keep pristine, so very little from these times is rare.

Inevitably, there will be disappointments for those who cared for their Doctor Who collections and believe everything will be worth a fortune. Target Books faithfully published adaptations of almost all the original stories. If you have them, sorry - the vast majority can still be found for 20p in second-hand bookshops, although some with lower print runs (Howe quotes The Wheel In Space) are more valuable.

Bentham's personal favourite is a 1970s book from Piccolo called The Making Of Doctor Who, with Jon Pertwee on the cover and a summary of the stories: 'This was the first time someone had collected the show's past together, reminded you of it - and reminded you that it was really rather good.'