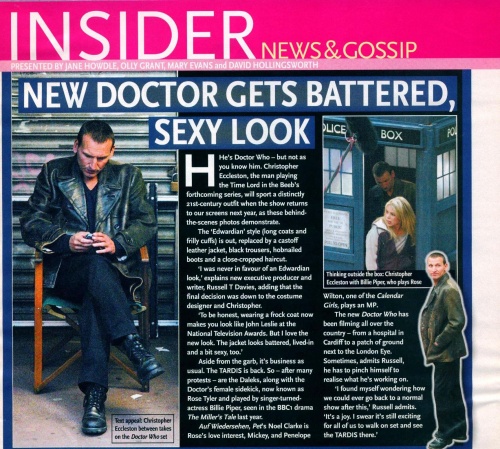 He's Doctor Who — but not as you know him. Christopher Eccleston, the man playing the Time Lord in the Beeb's forthcoming series, will sport a distinctly 21st-century outfit when the show returns to our screens next year, as these behind-the-scenes photos demonstrate.

The 'Edwardian' style (long coats and frilly cuffs) is out, replaced by a castoff leather jacket, black trousers, hobnailed boots and a close-cropped haircut.

'I was never in favour of an Edwardian look,' explains new executive producer and writer, Russell T Davies, adding that the final decision was down to the costume designer and Christopher.

'To be honest, wearing a frock coat now makes you look like John Leslie at the National Television Awards. But I love the new look. The jacket looks battered, lived-in and a bit sexy, too.'

Aside from the garb, it's business as usual. The TARDIS is back. So — after many protests — are the Daleks, along with the Doctor's female sidekick, now known as Rose Tyler and played by singer-turned-actress Billie Piper, seen in the BBC' drama The Miller's Tale last year.

The new Doctor Who has been filming all over the country — from a hospital in Cardiff to a patch of ground next to the London Eye. Sometimes, admits Russell, he has to pinch himself to realise what he's working on.

'I found myself wondering how we could ever go back to a normal show after this,' Russell admits. 'It's a joy. I swear it's still exciting for all of us to walk on set and see the TARDIS there.'

Caption: Text appeal: Christopher Eccleston between takes on the Doctor Who set

Caption: Thinking outside the box: Christopher Eccleston with Billie Piper, who plays Rose