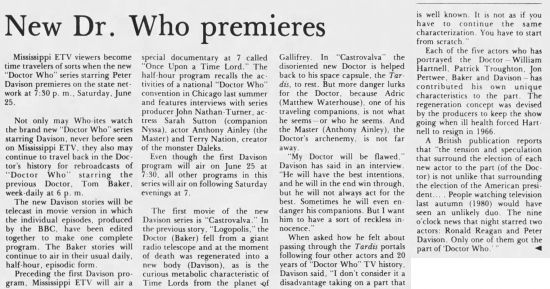 Not only may Who-ites watch the brand new "Doctor Who" series starring Davison, never before seen on Mississippi ETV, they also may continue to travel back in the Doctor's history for rebroadcasts of "Doctor Who" starring the previous Doctor, Tom Baker, week-daily at 6 p. m.

The new Davison stories will be telecast in movie version in which the individual episodes, produced by the BBC, have been edited together to make one complete program. The Baker stories will continue to air in their usual daily, half-hour, episodic form.

Preceding the first Davison program, Mississippi ETV will air a special documentary at 7 called "Once Upon a Time Lord." The half-hour program recalls the activities of a national "Doctor Who" convention in Chicago last summer and features interviews with series producer John Nathan-Turner, actress Sarah Sutton (companion Nyssa), actor Anthony Ainley (the Master) and Terry Nation, creator of the monster Daleks.

Even though the first Davison program will air on June 25 at 7:30, all other programs in this series will air on following Saturday evenings at 7.

The first movie of the new Davison series is "Castrovalva." In the previous story, "Logopolis," the Doctor (Baker) fell from a giant radio telescope and at the moment of death was regenerated into a new body (Davison), as is the curious metabolic characteristic of Time Lords from the planet of Gallifrey. In "Castrovalva" the disoriented new Doctor is helped back to his space capsule, the Tar-dis, to rest. But more danger lurks for the Doctor, because Adric (Matthew Waterhouse), one of his traveling companions, is not what he seems —or who he seems. And the Master (Anthony Ainley), the Doctor's archenemy, is not far away.

"My Doctor will be flawed," Davison has said in an interview. "He will have the best intentions, and he will in the end win through, but he will not always act for the best. Sometimes he will even endanger his companions. But I want him to have a sort of reckless innocence."

When asked how he felt about passing through the Tardis portals following four other actors and 20 years of "Doctor Who" TV history, Davison said, "I don't consider it a disadvantage taking on a part that is well known. It is not as if you have to continue the same characterization. You have to start from scratch."

Each of the five actors who has portrayed the Doctor -- William Hartnell, Patrick Troughton, Jon Pertwee, Baker and Davison — has contributed his own unique characteristics to the part. The regeneration concept was devised by the producers to keep the show going when ill health forced Hartnell to resign in 1966.

A British publication reports that "the tension and speculation that surround the election of each new actor to the part (of the Doctor) is not unlike that surrounding the election of the American president... . People watching television last autumn (1980) would have seen an unlikely duo. The nine o'clock news that night starred two actors: Ronald Reagan and Peter Davison. Only one of them got the part of 'Doctor Who.'"