New image for Dr Who 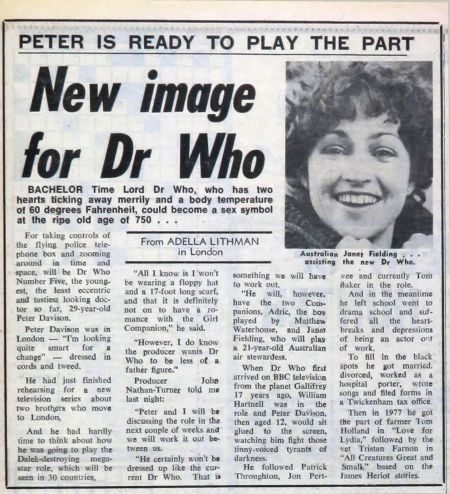 PETER IS READY TO PLAY THE PART

BACHELOR Time Lord Dr Who, who has two hearts ticking away merrily and a body temperature of 60 degrees Fahrenheit, could become a sex symbol at the ripe old age of 750...

For taking controls of the flying police telephone box and zooming around in time and space, will be Dr Who Number Five, the youngest, the least eccentric and tastiest looking doctor so far, 29-year-old Peter Davison.

Peter Davison was in London — "I'm looking quite smart for a change" — dressed in cords and tweed.

He had just finished rehearsing for a new television series about two brothers who move to London.

And he had hardly time to think about how he was going to play the Dalek-destroying mega-star role, which will be seen in 30 countries.

"All I know is I won't be wearing a floppy hat and a 17-foot long scarf, and that it is definitely not on to have a romance with the Girl Companion," he said.

"However, I do know the producer wants Dr Who to be less of a father figure."

Producer John Nathan-Turner told me last night: "Peter and I will be discussing the role in the next couple of weeks and we will work it out between us.

"He certainly won't be dressed up like the current Dr Who. That is something we will have to work out.

"He will, however, have the two Companions, Adric, the boy played by Matthew Waterhouse, and Janet Fielding, who will play a 21-year-old Australian air stewardess.

When Dr Who first arrived on BBC television from the planet Gallifrey 17 years ago, William Hartnell was in the role and Peter Davison, then aged 12, would sit glued to the screen, watching him fight those tinny-voiced tyrants of darkness.

He followed Patrick Throughton, Jon Pertwee and currently Tom Baker in the role.

And in the meantime he left school went to drama school and suffered all the heartbreaks and depressions of being an actor wit of work.

To fill in the black spots he got married. divorced, worked as a hospital porter, w tote songs and filed forms in a Twickenham tax office.

Then in 1977 he got the part of farmer Tom Holland in "Love for Lydia," followed by the vet Tristan Farnon in "All Creatures Great and Small," based on the James Heriot stories.