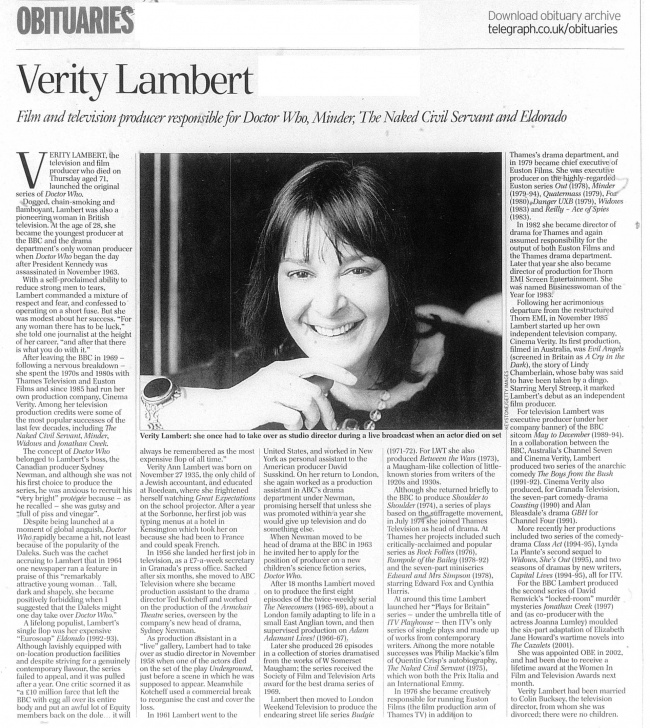 VERITY LAMBERT, the television and film producer who died on Thursday aged 71, launched the original series of Doctor Who.

Dogged, chain-smoking and flamboyant, Lambert was also a pioneering woman in British television. At the age of 28, she became the youngest producer at the BBC and the drama department's only woman producer when Doctor Who began the day after President Kennedy was assassinated in November 1963.

With a self-proclaimed ability to reduce strong men to tears, Lambert commanded a mixture of respect and fear, and confessed to operating on a short fuse. But she was modest about her success. "For any woman there has to be luck," she told one journalist at the height of her career, "and after that there is what you do with it."

After leaving the BBC in 1969 - following a nervous breakdown - she spent the 1970s and 1980s with Thames Television and Euston Films and since 1985 had run her own production company, Cinema Verity. Among her television production credits were some of the most popular successes of the last few decades, including The Naked Civil Servant, Minder, Widows and Jonathan Creek.

The concept of Doctor Who belonged to Lambert's boss, the Canadian producer Sydney Newman, and although she was not his first choice to produce the series, he was anxious to recruit his "very bright" protégée because - as he recalled - she was gutsy and "full of piss and vinegar".

Despite being launched at a moment of global anguish, Doctor Who rapidly became a hit, not least because of the popularity of the Daleks. Such was the cachet accruing to Lambert that in 1964 one newspaper ran a feature in praise of this "remarkably attractive young woman... Tall, dark and shapely, she became positively forbidding when I suggested that the Daleks might one day take over Doctor Who."

A lifelong populist, Lambert's single flop was her expensive "Eurosoap" Eldorado (1992-93). Although lavishly equipped with on-location production facilities and despite striving for a genuinely contemporary flavour, the series failed to appeal, and it was pulled after a year. One critic scorned it as "a £10 million farce that left the BBC with egg all over its entire body and put an awful lot of Equity members back on the dole... it will always be remembered as the most expensive flop of all time."

Verity Ann Lambert was born on November 27 1935, the only child of a Jewish accountant, and educated at Roedean, where she frightened herself watching Great Expectations on the school projector. After a year at the Sorbonne, her first job was typing menus at a hotel in Kensington which took her on because she had been to France and could speak French.

In 1956 she landed her first job in television, as a £7-a-week secretary in Granada's press office. Sacked after six months, she moved to ABC Television where she became production assistant to the drama director Ted Kotcheff and worked on the production of the Armchair Theatre series, overseen by the company's new head of drama, Sydney Newman.

As production assistant in a "live" gallery, Lambert had to take over as studio director in November 1958 when one of the actors died on the set of the play Underground, just before a scene in which he was supposed to appear. Meanwhile Kotcheff used a commercial break to reorganise the cast and cover the loss.

In 1961 Lambert went to the United States, and worked in New York as personal assistant to the American producer David Susskind. On her return to London, she again worked as a production assistant in ABC's drama department under Newman, promising herself that unless she was promoted within a year she would give up television and do something else.

When Newman moved to be head of drama at the BBC in 1963 he invited her to apply for the position of producer on a new children's science fiction series, Doctor Who.

After 18 months Lambert moved on to produce the first eight episodes of the twice-weekly serial The Newcomers (1965-69), about a London family adapting to life in a small East Anglian town, and then supervised production on Adam Adamant Lives! (1966-67).

Later she produced 26 episodes in a collection of stories dramatised from the works of W Somerset Maugham; the series received the Society of Film and Television Arts award for the best drama series of 1969.

Lambert then moved to London Weekend Television to produce the endearing street life series Budgie (1971-72). For LWT she also produced Between the Wars (1973), a Maugham-like collection of little-known stories from writers of the 1920s and 1930s.

Although she returned briefly to the BBC to produce Shoulder to Shoulder (1974), a series of plays based on the suffragette movement, in July 1974 she joined Thames Television as head of drama. At Thames her projects included such critically-acclaimed and popular series as Rock Follies (1976), Rumpole of the Bailey (1978-92) and the seven-part miniseries Edward and Mrs Simpson (1978), starring Edward Fox and Cynthia Harris.

At around this time Lambert launched her "Plays for Britain" series - under the umbrella title of ITV Playhouse - then ITV's only series of single plays and made up of works from contemporary writers. Among the more notable successes was Philip Mackie's film of Quentin Crisp's autobiography, The Naked Civil Servant (1975), which won both the Prix Italia and an International Emmy.

In 1982 she became director of drama for Thames and again assumed responsibility for the output of both Euston Films and the Thames drama department. Later that year she also became director of production for Thorn EMI Screen Entertainment. She was named Businesswoman of the Year for 1983.

Following her acrimonious departure from the restructured Thorn EMI, in November 1985 Lambert started up her own independent television company, Cinema Verity. Its first production, filmed in Australia, was Evil Angels (screened in Britain as A Cry in the Dark), the story of Lindy Chamberlain, whose baby was said to have been taken by a dingo. Starring Meryl Streep, it marked Lambert's debut as an independent film producer.

For television Lambert was executive producer (under her company banner) of the BBC sitcom May to December (1989-94). In a collaboration between the BBC, Australia's Channel Seven and Cinema Verity, Lambert produced two series of the anarchic comedy The Boys from the Bush (1991-92). Cinema Verity also produced, for Granada Television, the seven-part comedy-drama Coasting (1990) and Alan Bleasdale's drama GBH for Channel Four (1991).

For the BBC Lambert produced the second series of David Renwick's "locked-room" murder mysteries Jonathan Creek (1997) and (as co-producer with the actress Joanna Lumley) moulded the six-part adaptation of Elizabeth Jane Howard's wartime novels into The Cazalets (2001).

She was appointed OBE in 2002, and had been due to receive a lifetime award at the Women In Film and Television Awards next month.

Verity Lambert had been married to Colin Bucksey, the television director, from whom she was divorced; there were no children.