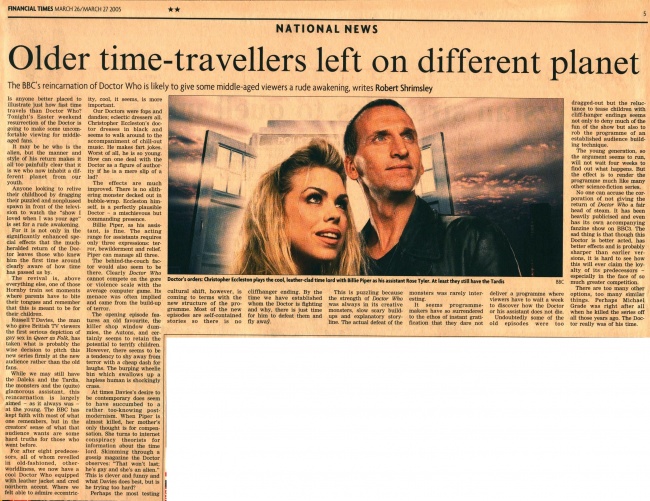 The BBC's reincarnation of Doctor Who is likely to give some middle-aged viewers a rude awakening, writes Robert Shrimsley

Is anyone better placed to illustrate just how fast time travels than Doctor Who? Tonight's Easter weekend resurrection of the Doctor is going to make some uncomfortable viewing for middle-aged fans.

It may be he who is the alien, but the manner and style of his return makes it all too painfully clear that it is we who now inhabit a different planet from our youth.

Anyone looking to relive their childhood by dragging their puzzled and nonplussed spawn in front of the television to watch the "show I loved when I was your age" is set for a rude awakening.

For it is not only in the significantly enhanced special effects that the much-heralded return of the Doctor leaves those who knew him the first time around clearly aware of how time has passed us by.

The revival is, above everything else, one of those Hornby train set moments where parents have to bite their tongues and remember that this is meant to be for their children.

Russell T Davies, the man who gave British TV viewers the first serious depiction of gay sex in Queer as Folk, has taken what is probably the wise decision to pitch this new series firmly at the new audience rather than the old fans.

While we may still have the Daleks and the Tardis, the monsters and the (quite) glamorous assistant, this reincarnation is largely aimed - as it always was at the young. The BBC has kept faith with most of what one remembers, but in the creators' sense of what that audience wants are some hard truths for those who went before.

For after eight predecessors, all of whom revelled in old-fashioned, otherworldliness, we now have a cool Doctor Who equipped with leather jacket and cred northern accent. Where we felt able to admire eccentricity, cool, it seems, is more important.

Our Doctors were fops and dandies; eclectic dressers all. Christopher Eccleston's doctor dresses in black and seems to walk around to the accompaniment of chill-out music. He makes fart jokes. Worst of all, he is so young. How can one deal with the Doctor as a figure of authority if he is a mere slip of a lad?

The effects are much improved. There is no slithering monster decked out in bubble-wrap. Eccleston himself, is a perfectly plausible Doctor - a mischievous but commanding presence.

Billie Piper, as his assistant, is fine. The acting range for assistants requires only three expressions: terror, bewilderment and relief. Piper can manage all three.

The behind-the-couch factor would also seem to be there. Clearly Doctor Who cannot compete on the gore or violence scale with the average computer game. Its menace was often implied and came from the build-up of terror.

The opening episode features an old favourite, the killer shop window dummies, the Autons, and certainly seems to retain the potential to terrify children. However, there seems to be a tendency to shy away from terror with a cheap dash for laughs. The burping wheelie bin which swallows up a hapless human is shockingly crass.

At times Davies's desire to be contemporary does seem to have succumbed to a rather too-knowing postmodernism. When Piper is almost killed, her mother's only thought is for compensation. She turns to internet conspiracy theorists for information about the time lord. Skimming through a gossip magazine the Doctor observes: "That won't last; he's gay and she's an alien." This is clever and funny and what Davies does best, but is he trying too hard?

Perhaps the most testing cultural shift, however, is coming to terms with the new structure of the programme. Most of the new episodes are self-contained stories so there is no cliffhanger ending. By the time we have established whom the Doctor is fighting and why, there is just time for him to defeat them and fly away.

This is puzzling because the strength of Doctor Who was always in its creative monsters, slow scary buildups and explanatory story-line. The actual defeat of the monsters was rarely interesting.

It seems programme-makers have so surrendered to the ethos of instant gratification that they dare not deliver a programme where viewers have to wait a week to discover how the Doctor or his assistant does not die.

Undoubtedly some of the old episodes were too dragged-out but the reluctance to tease children with cliff-hanger endings seems not only to deny much of the fun of the show but also to rob the programme of an established audience building technique.

The young generation, so the argument seems to run, will not wait four weeks to find out what happens. But the effect is to render the programme much like many other science-fiction series.

No one can accuse the corporation of not giving the return of Doctor Who a fair head of steam. It has been heavily publicised and even has its own accompanying fanzine show on BBC3. The sad thing is that though this Doctor is better acted, has better effects and is probably sharper than earlier versions, it is hard to see how this will ever claim the loyalty of its predecessors especially in the face of so much greater competition.

There are too many other options, too many similar things. Perhaps Michael Grade was right after all when he killed the series off all those years ago. The Doctor really was of his time.

Caption: Doctor's orders: Christopher Eccleston plays the cool, leather-clad time lord with Billie Piper as his assistant Rose Tyler. At least they still have the Tardis