One for all and all for one 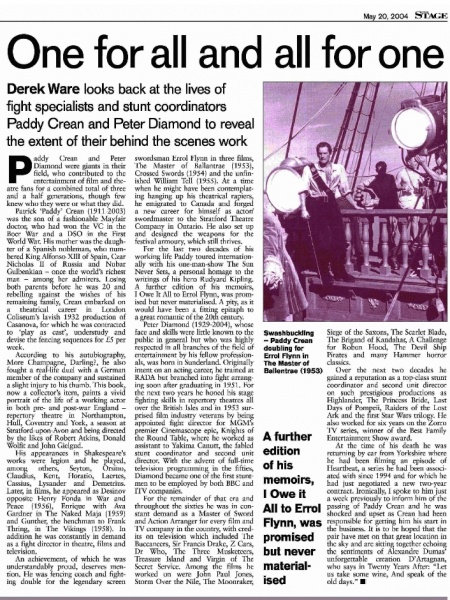 Paddy Crean and Peter Diamond were giants in their field, who contributed to the entertainment of film and theatre fans for a combined total of three and a half generations, though few knew who they were or what they did.

Patrick 'Paddy' Crean (1911-2003) was the son of a fashionable Mayfair doctor, who had won the VC in the Boer War and a DSO in the First World War. His mother was the daughter of a Spanish nobleman, who numbered King Alfonso XIII of Spain, Czar Nicholas II of Russia and Nubar Gulbenkian — once the world's richest man — among her admirers. Losing both parents before he was 20 and rebelling against the wishes of his remaining family, Crean embarked on a theatrical career in London Coliseum's lavish 1932 production of Casanova, for which he was contracted to 'play as cast', understudy and devise the fencing sequences for £5 per week.

According to his autobiography, More Champagne, Darling?, he also fought a real-life duel with a German member of the company and sustained a slight injury to his thumb. This book, now a collector's item, paints a vivid portrait of the life of a working actor in both preand post-war England —repertory theatre in Northampton, Hull, Coventry and York, a season at Stratford-upon-Avon and being directed by the likes of Robert Atkins, Donald Wolfit and John Gielgud.

His appearances in Shakespeare's works were legion and he played, among others, Seyton, Orsino, Claudius, Kent, Horatio, Laertes, Cassius, Lysander and Demetrius. Later, in films, he appeared as Desinov opposite Henry Fonda in War and Peace (1956), Enrique with Ava Gardner in The Naked Maja (1959) and Gunther, the henchman to Frank Thring, in The Vikings (1958). In addition he was constantly in demand as a fight director in theatre, films and television.

An achievement, of which he was understandably proud, deserves mention. He was fencing coach and fighting double for the legendary screen swordsman Errol Flynn in three films, The Master of Ballantrae (1953), Crossed Swords (1954) and the unfinished William Tell (1955). At a time when he might have been contemplating hanging up his theatrical rapiers, he emigrated to Canada and forged a new career for himself as actor/ swordmaster to the Stratford Theatre Company in Ontario. He also set up and designed the weapons for the festival armoury, which still thrives.

For the last two decades of his working life Paddy toured internationally with his one-man-show The Sun Never Sets, a personal homage to the writings of his hero Rudyard Kipling. A further edition of his memoirs, I Owe It All to Errol Flynn, was promised but never materialised. A pity, as it would have been a fitting epitaph to a great romantic of the 20th century.

Peter Diamond (1929-2004), whose face and skills were little known to the public in general but who was highly respected in all branches of the field of entertainment by his fellow professionals, was horn in Sunderland. Originally intent on an acting career, he trained at RADA but branched into fight arranging soon after graduating in 1951. For the next two years he honed his stage fighting skills in repertory theatres all over the British Isles and in 1953 surprised film industry veterans by being appointed fight director for MGM's premier Cinemascope epic, Knights of the Round Table, where he worked as assistant to Yakima Canutt, the fabled stunt coordinator and second unit director. With the advent of full-time television programming in the fifties, Diamond became one of the first stuntmen to be employed by both BBC and ITV companies.

For the remainder of that era and throughout the sixties he was in constant demand as a Master of Sword and Action Arranger for every film and TV company in the country, with credits on television which included The Buccaneers, Sir Francis Drake, Z Cars, Dr Who, The Three Musketeers, Treasure Island and Virgin of The Secret Service. Among the films he worked on were John Paul Jones, Storm Over the Nile, The Moonraker, Siege of the Saxons, The Scarlet Blade, The Brigand of Kandahar, A Challenge for Ro on Hood, The Devil Ship Pirates and many Hammer horror classics.

Over the next two decades he gained a reputation as a top-class stunt coordinator and second unit director on such prestigious productions as Highlander, The Princess Bride, Last Days of Pompeii, Raiders of the Lost Ark and the first Star Wars trilogy. He also worked for six years on the Zorro TV series, winner of the Best Family Entertainment Show award.

At the time of his death he was returning by car from Yorkshire where he had been filming an episode of Heartbeat, a series he had been associated with since 1994 and for which he had just negotiated a new two-year contract. Ironically, I spoke to him just a week previously to inform him of the passing of Paddy Crean and he was shocked and upset as Crean had been responsible for getting him his start in the business. It is to be hoped that the pair have met on that great location in the sky and are sitting together echoing the sentiments of Alexandre Dumas' unforgettable creation D'Artagnan, who says in Twenty Years After: "Let us take some wine, And speak of the old days."

Caption: Swashbuckling — Paddy Crean doubling for Errol Flynn in The Master of Ballentrae (1953)