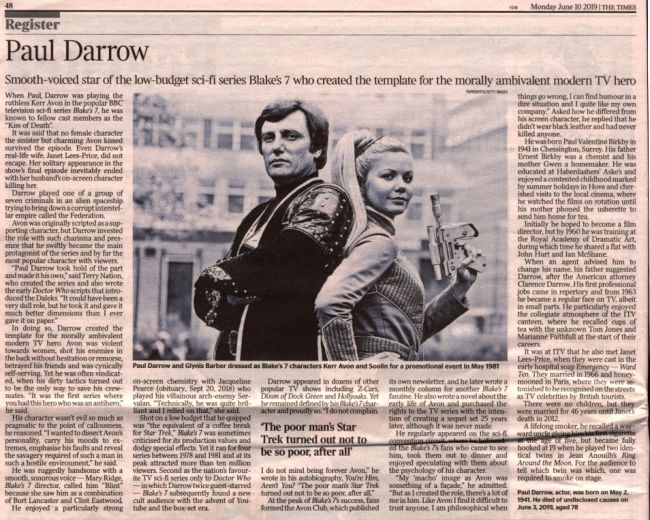 When Paul, Darrow was playing the ruthless Kerr Avon in the popular BBC television sci-fi series Blake's 7, he was known to fellow cast members as the "Kiss of Death".

It was said that no female character the sinister but charming Avon kissed survived the episode. Even Darrow's real-life wife, Janet Lees-Price, did not escape. Her solitary appearance in the show's final episode inevitably ended with her husband's on-screen character killing her.

Darrow played one of a group of seven criminals in an alien spaceship trying to bring down a corrupt interstellar empire called the Federation.

Avon was originally scripted as a supporting character, but Darrow invested the role with such charisma and presence that he swiftly became the main protagonist of the series and by far the most popular character with viewers.

"Paul Darrow took hold of the part and made it his own," said Terry Nation, who created the series and also wrote the early Doctor Who scripts that introduced the Daleks. "It could have been a very dull role, but he took it and gave it much better dimensions than I ever gave it on paper."

In doing so, Darrow created the template for the morally ambivalent modern TV hero. Avon was violent towards women, shot his enemies in the back without hesitation or remorse, betrayed his friends and was cynically self-serving. Yet he was often vindicated, when his dirty tactics turned out to be the only way to save his crew-mates. "It was the first series where you had this hero who was an antihero," he said.

His character wasn't evil so much as pragmatic to the point of callousness, he reasoned. "I wanted to dissect Avon's personality, carry his moods to extremes, emphasise his faults and reveal the savagery required of such a man in such a hostile environment," he said.

He was ruggedly handsome with a smooth, sonorous voice — Mary Ridge, Blake's 7 director, called him "Blint" because she saw him as a combination of Burt Lancaster and Clint Eastwood.

He enjoyed a particularly strong on-screen chemistry with Jacqueline Pearce (obituary, Sept 20, 2018) who played his villainous arch-enemy Servalan. "Technically, he was quite brilliant and I relied on that," she said.

Shot on a low budget that he quipped was "the equivalent of a coffee break for Star Trek," Blake's 7 was sometimes criticised for its production values and dodgy special effects. Yet it ran for four series between 1978 and 1981 and at its peak attracted more than ten million viewers. Second as the nation's favourite TV sci-fi series only to Doctor Who — in which Darrow twice guest-starred — Blake's 7 subsequently found a new cult audience with the advent of You-tube and the box-set era.

Darrow appeared in dozens of other popular TV shows including Z-Cars, Dixon of Dock Green and Hollyoaks. Yet he remained defined by his Blake's 7 character and proudly so. "I do not complain. I do not mind being forever Avon," he wrote in his autobiography, You're Him, Aren't You? "The poor man's Star Trek turned out not to be so poor, after all."

At the peak of Blake's 7's success, fans formed the Avon Club, which published its own newsletter, and he later wrote a monthly column for another Blake's 7 fanzine. He also wrote a novel about the early life of Avon and purchased the rights to the TV series with the intention of creating a sequel set 25 years later, although it was never made.

He regularly appeared on the sci-fi convention circuit, where he befriended the Blake's 7's fans who came to see him, took them out to dinner and enjoyed speculating with them about the psychology of his character.

"My 'macho' image as Avon was something of a facade," he admitted. "But as I created the role, there's a lot of me in him. Like Avon 1 find it difficult to trust anyone, I am philosophical when things go wrong, I can find humour in a dire situation and 1 quite like my own company." Asked how he differed from his screen character, he replied that he didn't wear black leather and had never killed anyone.

He was born Paul Valentine Birkby in 1941 in Chessington, Surrey. His father Ernest Birkby was a chemist and his mother Gwen a homemaker. He was educated at Haberdashers' Aske's and enjoyed a contented childhood marked by summer holidays in Hove and cherished visits to the local cinema, where he watched the films on rotation until his mother phoned the usherette to send him home for tea.

Initially he hoped to become a film director, but by 1960 he was training at the Royal Academy of Dramatic Art, during which time he shared a flat with John Hurt and Ian McShane.

When an agent advised him to change his name, his father suggested Darrow, after the American attorney Clarence Darrow. His first professional jobs came in repertory and from 1963 he became a regular face on TV, albeit in small parts. He particularly enjoyed the collegiate atmosphere of the ITV canteen, where he recalled cups of tea with the unknown Tom Jones and Marianne Faithful! at the start of their careers.

It was at ITV that he also met Janet Lees-Price, when they were cast in the early hospital soap Emergency — Word Ten. They married in 1966 and honeymooned in Paris, where they were astonished to be recognised on the streets as TV celebrities by British tourists.

There were no children, but they were married for 46 years until Janet's death in 2012.

A lifelong smoker, he recalled a wayward uncle giving him his first cigarette at the age of five, but became fully hooked at 19 when he played two identical twins in Jean Anouilh's Ring Around the Moon. For the audience to tell which twin was which, one was required to smoke on stage.

Caption: Paul Darrow and Glynis Barber dressed as Blake's 7 characters Kerr Avon and Soolin for a promotional event in May 1981