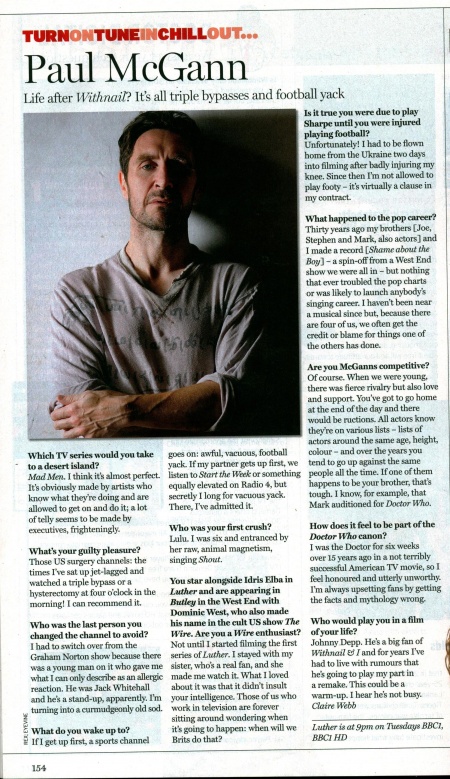 Life after Withnail? It's all triple bypasses and football yack

Mad Men. I think it's almost perfect. It's obviously made by artists who know what they're doing and are allowed to get on and do it; a lot of telly seems to be made by executives, frighteningly.

Those US surgery channels: the times I've sat up jet-lagged and watched a triple bypass or a hysterectomy at four o'clock in the morning! I can recommend it.

Who was the last person you changed the channel to avoid?

I had to switch over from the Graham Norton show because there was a young man on it who gave me what I can only describe as an allergic reaction. He was Jack Whitehall and he's a stand-up, apparently. I'm , turning into a curmudgeonly old sod.

What do you wake up to?

If I get up first, a sports channel goes on: awful, vacuous, football yack. If my partner gets up first, we listen to Start the Week or something equally elevated on Radio 4, but secretly I long for vacuous yack. There, I've admitted it.

Who was your first crush?

Lulu. I was six and entranced by her raw, animal magnetism, singing Shout.

You star alongside Idris Elba in Luther and are appearing in Butley in the West End with Dominic West, who also made his name in the cult US show The Wire. Are you a Wire enthusiast?

Not until I started filming the first series of Luther. I stayed with my sister, who's a real fan, and she made me watch it. What I loved about it was that it didn't insult your intelligence. Those of us who work in television are forever sitting around wondering when it's going to happen: when will we Brits do that?

Is it true you were due to play Sharpe until you were injured playing football?

Unfortunately! I had to be flown home from the Ukraine two days into filming after badly injuring my knee. Since then I'm not allowed to play footy - it's virtually a clause in my contract.

What happened to the pop career?

Thirty years ago my brothers [Joe, Stephen and Mark, also actors] and I made a record [Shame about the Boy] - a spin-off from a West End show we were all in - but nothing that ever troubled the pop charts or was likely to launch anybody's singing career. I haven't been near a musical since but, because there are four of us, we often get the credit or blame for things one of the others has done.

Of course. When we were young, there was fierce rivalry but also love and support. You've got to go home at the end of the day and there would be ructions. All actors know they're on various lists - lists of actors around the same age, height, colour - and over the years you tend to go up against the same people all the time. If one of them happens to be your brother, that's tough. I know, for example, that Mark auditioned for Doctor Who.

How does it feel to be part of the Doctor Who canon?

I was the Doctor for six weeks over 15 years ago in a not terribly successful American TV movie, so I feel honoured and utterly unworthy. I'm always upsetting fans by getting the facts and mythology wrong.

Who would play you in a film of your life?

Johnny Depp. He's a big fan of Withnail & I and for years I've had to live with rumours that he's going to play my part in a remake. This could be a warm-up. I hear he's not busy.

Luther is at 9pm on Tuesdays BBC1, BBC1 HD