Philly hears a Who 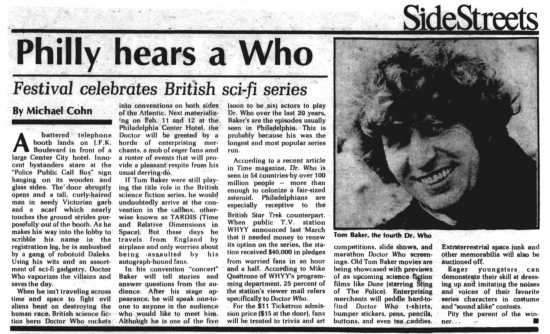 A battered telephone booth lands on J.F.K. Boulevard in front of a large Center City hotel. Innocent bystanders stare at the "Police Public Call Box" sign hanging on its wooden and glass sides. The' door abruptly opens and a tall. curly-haired man in seedy Victorian garb and a scarf which nearly touches the ground strides purposefully out of the booth. As he makes his way into the lobby to scribble his name in the registration log, he is ambushed by a gang of robotoid Daleks. Using his wits and an assortment of sci-fi gadgetry. Doctor Who vaporizes the villains and saves the day.

When he isn't traveling across time and space to fight evil aliens bent on destroying the human race. British science fiction hero Doctor Who rockets into conventions on both sides of the Atlantic. Next materializing on Feb. 11 and 12 at the. Philadelphia Center Hotel. the Doctor will be greeted by a horde of enterprising merchants. a mob of eager fans and a roster Or events that will provide a pleasant respite from his usual derring-do.

IF Tom Baker were still playing the title role in the British science fiction series. he would undoubtedly arrive at the convention in the callbox. otherwise known as TARDIS (Time and Relative Dimensions in Space). But these days he travels from England by airplane and only worries about being assaulted by his autograph-hound fans.

In his convention "concert" Baker will tell stories and answer questions from the audience. After his stage appearance. he will speak one-to-one to anyone in the audience who would like to meet him. Although he is one of the five (soon to be six) actors to play Dr. Who over the last 20 years. Baker's are the episodes usually seen in Philadelphia. This is probably because his was the longest and most popular series run.

According to a recent article in Time magazine, Dr. Who is seen in 59 countries by over 100 million people — more than enough to colonize a fair-sized asteroid. Philadelphians are especially receptive to the British Star Trek counterpart. When public T.V. station WHYY announced last March that it needed money to renew its option on the series, the station received $40,000 in pledges from worried fans in an hour and a half. According to Mike Quattrone of WHYY's programming department. 25 percent of the station's viewer mail refers specifically to Doctor Who.

For the $11 Ticketron admission price ($15 at the door). fans will he treated to trivia and art Toro Baker, the fourth Dr. Who competitions, slide shows, and marathon Doctor Who screenings. Old Tom Baker movies are being showcased with previews of as upcoming science fiction films like Dune (starring Sting of The Police). Enterprising merchants will peddle hard-to-find Doctor Who t-shirts, bumper stickers, pens, pencils, buttons, and even tea caddies.

Extraterrestrial space junk and other memorabilia will also be auctioned off.

Eager youngsters can demonstrate their skill at dressing up and imitating the noises and voices of their favorite series characters in costume and "sound alike" contests.

Pity the parent of the winner...