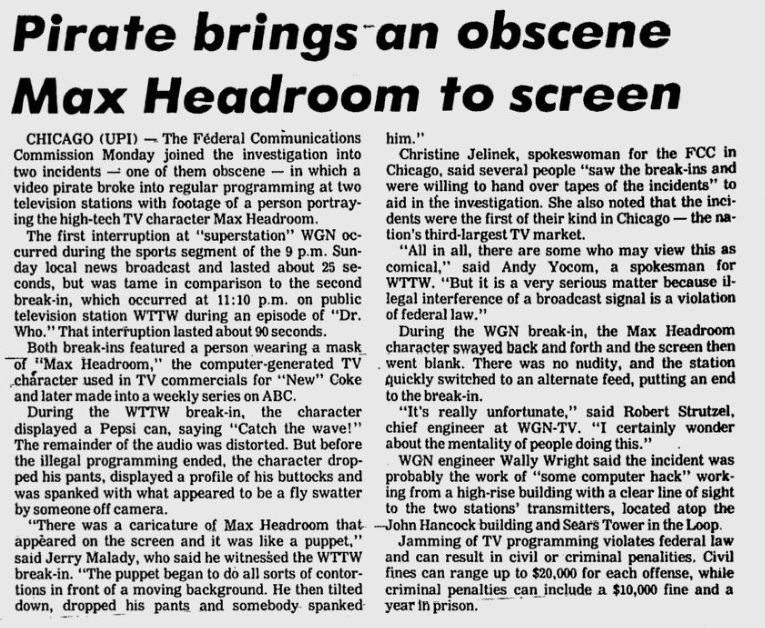 CHICAGO (UPI) — The Federal Communications Commission Monday joined the investigation into two incidents — one of them obscene — in which a video pirate broke into regular programming at two television stations with footage of a person portraying the high-tech TV character Max Headroom.

The first interruption at "superstation" WGN occurred during the sports segment of the 9 p m. Sunday local news broadcast and lasted about 25 seconds, but was tame in comparison to the second break-in, which occurred at 11:10 p.m. on public television station WTTW during an episode of "Dr. Who." That interruption lasted about 90 seconds.

Both break-ins featured a person wearing a mask of "Max Headroom," the computer-generated TV character used in TV commercials for "New" Coke and later made into a weekly series on ABC.

During the WTTW break-in, the character displayed a Pepsi can, saying "Catch the wave!" The remainder of the audio was distorted. But before the illegal programming ended, the character dropped his pants, displayed a profile of his buttocks and was spanked with what appeared to be a fly swatter by someone off camera.

"There was a caricature of Max Headroom that appeared on the screen and it was like a puppet," said Jerry Malady, who said he witnessed the WTTW break-in. "The puppet began to do all sorts of contortions in front of a moving background. He then tilted down, dropped his pants and somebody spanked him."

Christine Jelinek, spokeswoman for the FCC in Chicago. said several people "saw the break-ins and were willing to hand over tapes of the incidents" to aid in the investigation. She also noted that the incidents were the first of their kind in Chicago — the nation's third-largest TV market.

"All in all, there are some who may view this as comical," said Andy Yocom, a spokesman for WTTW. "But it is a very serious matter because illegal interference of a broadcast signal is a violation of federal law."

During the WGN break-in, the Max Headroom character swayed back and forth and the screen then went blank. There was no nudity, and the station quickly switched to an alternate feed, putting an end to the break-in.

"It's really unfortunate," said Robert Strutzel, chief engineer at WGN-TV. "I certainly wonder about the mentality of people doing this."

WGN engineer Wally Wright said the incident was probably the work of "some computer hack" working from a high-rise building with a clear line of sight to the two stations' transmitters, located atop the John Hancock building and Sears Tower in the Loop. Jamming of TV programming violates federal law and can result in civil or criminal penalities. Civil fines can range up to $20,000 for each offense, while criminal penalties can include a $10,000 fine and a year in prison.