Prepare for an invasion of the Dr Who toys 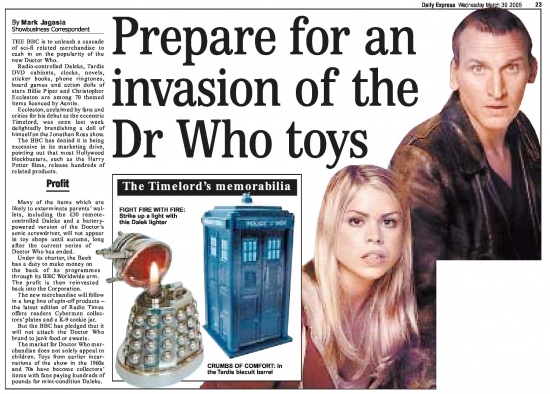 THE BBC is to unleash a cascade of sci-fi related merchandise to cash in on the popularity of the new Doctor Who.

Eccleston, acclaimed by fans and critics for his debut as the eccentric Timelord, was seen last week delightedly brandishing a doll of himself on the Jonathan Ross show.

The BBC has denied it is being excessive in its marketing drive, pointing out that most Hollywood blockbusters, such as the Harry Potter films, release hundreds of related products.

Many of the items which are likely to exterminate parents' wallets, including the £30 remote-controlled Daleks and a battery-powered version of the Doctor's sonic screwdriver, will not appear in toy shops until autumn, long after the current series of Doctor Who has ended.

Under its charter, the Beeb has a duty to make money on the back of its programmes through its BBC Worldwide arm. The profit is then reinvested back into the Corporation.

The new merchandise will follow in a long line of spin-off products — the latest edition of Radio Times offers readers Cybermen collectors' plates and a K-9 cookie jar.

But the BBC has pledged that it will not attach the Doctor Who brand to junk food or sweets.

The market for Doctor Who merchandise does not solely appeal to children. Toys from earlier incarnations of the show in the 1960s and 70s have become collectors' items with fans paying hundreds of pounds for mint-condition Daleks.

Caption: FIGHT FIRE WITH FIRE: Strike up a light with this Dalek lighter

Caption: CRUMBS OF COMFORT: In the Tardis biscuit barrel