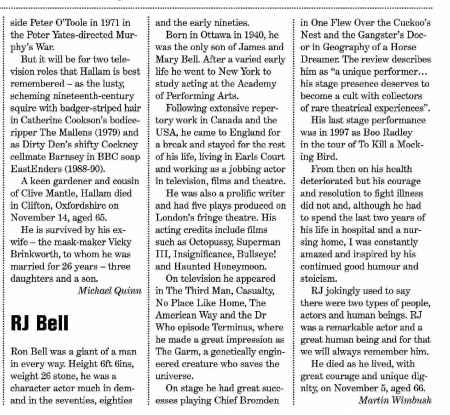 Ron Bell was a giant of a man in every way. Height 6ft dins, weight 26 stone, he was a character actor much in demand in the seventies, eighties and the early nineties.

Born in Ottawa in 1940, he was the only son of James and Mary Bell. After a varied early life he went to New York to study acting at the Academy of Performing Arts.

Following extensive repertory work in Canada and the USA, he came to England for a break and stayed for the rest of his life, living in Earls Court and working as a jobbing actor in television, films and theatre. He was also a prolific writer and had five plays produced on London's fringe theatre. His acting credits include films such as Octopussy, Superman HI, Insignificance, Bullseyel and Haunted Honeymoon. On television he appeared in The Third Man, Casualty, No Place Like Home, The American Way and the Dr Who episode Terminus, where he made a great impression as The Garm, a genetically engineered creature who saves the universe.

On stage he had great successes playing Chief Bromden in One Flew Over the Cuckoo's Nest and the Gangster's Doctor in Geography of a Horse Dreamer. The review describes him as "a unique performer... his stage presence deserves to become a cult with collectors of rare theatrical experiences". His last stage performance was in 1997 as Boo Radley in the tour of To a Mocking Bird.

From then on his health deteriorated but his courage and resolution to fight illness did not and, although he had to spend the last two years of his life in hospital and a nursing home, I was constantly amazed and inspired by his continued good humour and stoicism.

RJ jokingly used to say there were two types of people, actors and human beings. RJ was a remarkable actor and a great human being and for that we will always remember him. He died as he lived, with great courage and unique dignity on November 5, aged 66.