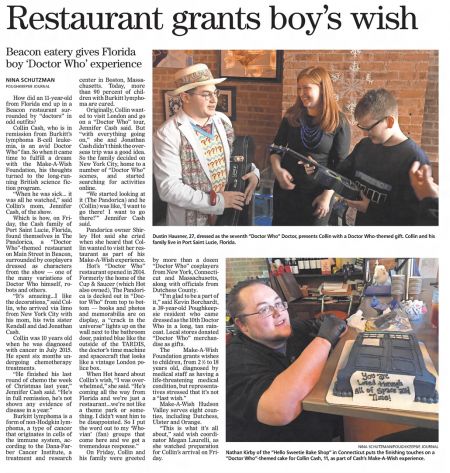 How did an 11-year-old from Florida end up in a Beacon restaurant surrounded by "doctors" in odd outfits?

Collin Cash, who is in remission from Burkitt's lymphoma B-cell leukemia, is an avid Doctor Who" fan. So when it came time to fulfill a dream with the Make-A-Wish Foundation, his thoughts turned to the long-running British science fiction program.

"When he was sick... it was all he watched," said Collin's mom, Jennifer Cash, of the show.

Which is how, on Friday, the Cash family of Port Saint Lucie, Florida, found themselves in The Pandorica, a "Doctor Who"-themed restaurant on Main Street in Beacon, surrounded by cosplayers dressed as characters from the show — one of the many variations of Doctor Who himself, robots and others.

"It's amazing...I like the decorations," said Collin, who arrived via limo from New York City with his mom, his twin sister Kendall and dad Jonathan Cash.

Collin was 10 years old when he was diagnosed with cancer in July 2015. He spent six months undergoing chemotherapy treatments.

"He finished his last round of chemo the week of Christmas last year," Jennifer Cash said. "He's in full remission, he's not shown any evidence of disease in a year."

Burkitt lymphoma is a form of non-Hodgkin lymphoma, a type of cancer that originates in cells of the immune system, according to the Dana-Farber Cancer Institute, a treatment and research center in Boston, Massachusetts. Today, more than 90 percent of children with Burkitt lymphoma are cured.

Originally, Collin wanted to visit London and go on a "Doctor Who" tour, Jennifer Cash said. But "with everything going on," she and Jonathan Cash didn't think the overseas trip was a good idea. So the family decided on New York City, home to a number of "Doctor Who" scenes, and started searching for activities online.

Pandorica owner Shirley Hot said she cried when she heard that Collin wanted to visit her restaurant as part of his Make-A-Wish experience.

Hot's "Doctor Who" restaurant opened in 2014. Formerly the home of the Cup & Saucer (which Hot also owned), The Pandorica is decked out in "Doctor Who" from top to bottom — books and photos and memorabilia are on display, a "crack in the universe" lights up on the wall next to the bathroom door, painted blue like the outside of the TARDIS, the doctor's time machine and spacecraft that looks like a vintage London police box.

When Hot heard about Collin's wish, "I was overwhelmed," she said. "He's coming all the way from Florida and were just a restaurant...were not like a theme park or something. I didn't want him to be disappointed. So I put the word out to my 'Whovian' (fan) groups that come here and we got a tremendous response."

On Friday, Collin and his family were greeted by more than a dozen "Doctor Who" cosplayers from New York, Connecticut and Massachusetts, along with officials from Dutchess County.

"I'm glad to be a part of it," said Kevin Borchardt, a 39-year-old Poughkeepsie resident who came dressed as the 10th Doctor Who in a long, tan raincoat. Local stores donated "Doctor Who" merchandise as gifts.

The Make-A-Wish Foundation grants wishes to children, from 2 1/2 to 18 years old, diagnosed by medical staff as having a life-threatening medical condition, but representatives stressed that it's not a "last wish."

"This is what it's all about," said wish coordinator Megan Laurelli, as she watched preparation for Collin's arrival on Friday.

Caption: Nathan Kirby of the "Hello Sweetie Bake Shop" in Connecticut puts the finishing touches on a "Doctor Who"-themed cake for Collin Cash, 11, as part of Cash's Make-A-Wish experience.