Rory Fave To Be New Who 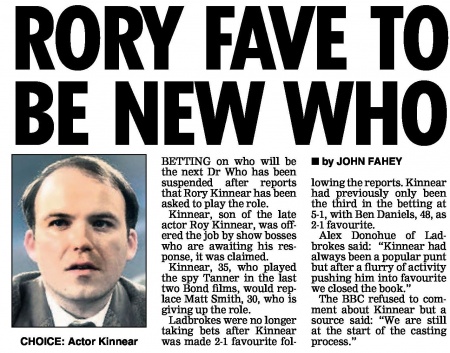 BETTING on who will be the next Dr Who has been suspended after reports that Rory Kinnear has been asked to play the role.

Kinnear, son of the late actor Roy Kinnear, was offered the job by show bosses who are awaiting his response, it was claimed.

Kinnear, 35, who played the spy Tanner in the last two Bond films, would replace Matt Smith, 30, who is giving up the role.

Ladbrokes were no longer taking bets after Kinnear was made 2-1 favourite following the reports. Kinnear had previously only been the third in the betting at 5-1, with Ben Daniels, 48, as 2-1 favourite.

Alex Donohue of Ladbrokes said: "Kinnear had always been a popular punt but after a flurry of activity pushing him into favourite we closed the book."

The BBC refused to comment about Kinnear but a source said: "We are still at the start of the casting process."